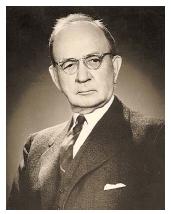 A portrait of Owen Wilson. In the preface of "The Care and Feeding of Southern Babies," Wilson said that other similar works focused on childrearing in cooler climates, and therefore were inapplicable to infants in the southern United States.

A native of Tennessee, Owen Wilson was a pioneer in pediatric medicine. Born on July 20, 1870, he entered Vanderbilt University in 1884, at the age of fourteen, and graduated with an engineering degree in 1889. He immediately enrolled in Vanderbilt University's Medical School, and graduated two years later. Wilson pursued additional training at New York Polyclinic Medical School and Hospital.

After practicing with a prominent Nashville surgeon for several years, Wilson decided to specialize in children's diseases. He established a large pediatric practice in Nashville and served as Professor of Pediatrics at Vanderbilt University Medical School from 1909 through 1942.

In 1926, Wilson published a book entitled The Care and Feeding of Southern Babies: A Guide for Mothers, Nurses, and Baby Welfare Workers in the South. Wilson believed that babies in the southern United States, because of climate and family food habits, required different feeding guidelines than those generally given in the early twentieth century. In his book, Wilson offered instruction on the care and feeding of children from birth until age three, and he included tables of height, weight, and child development, as well as some recipes. Only three hundred copies of this book were published. Wilson suffered from a fatal heart attack on May 10, 1960.