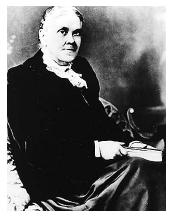 In her 1903 book titled Education, Ellen G. White wrote, "Grains, fruits, nuts, and vegetables, in proper combination, contain all the elements of nutrition; and when properly prepared, they constitute the diet that best promotes both physical and mental strength."

Ellen Gould White was born eight miles east of Portland, Maine, in 1827, during a time characterized by the news analyst and commentator John Harvey as "an era of medical ignorance bordering on barbarism ... when doctors were still bloodletting and performing surgery with unwashed hands." With little education, Ellen White became a prolific writer and a strong advocate of good nutrition.

Her parents, Robert and Eunice Harmon, had eight children, including Ellen's twin sister, Elizabeth. They were followers of William Miller, who espoused the second coming of Christ, and part of the Millerite movement, which later led to the founding of the Seventh-day Adventist Church. In 1846, Ellen married James White, who was a preacher and a cofounder of the Seventh-day Adventist Church. The couple had three sons, and they eventually made their home in Battle Creek, Michigan.

Though shy and reluctant, Ellen White was to become a popular lecturer on temperance. Initially unaccustomed to being vegetarian, she became convinced that she should adopt a meatless diet (though this was not required by the Church). Other foods, such as coffee and strong cheese, also were eliminated from her table. Not all her books were about health, however. Over her lifetime, she produced a steady amount of work, some devotional, some historical, and some educational in nature.

On June 6, 1863, White had a vision that included instructions on such health-related matters as the use of drugs, tobacco, tea, coffee, flesh foods, fresh air, and self-control regarding one's diet. Speaking of this experience, she said, "I saw that it was a sacred duty to attend to our health, and to arouse others to their duty.... We have a duty to speak, to come out against intemperance of every kind.... I saw that we should not be silent upon the subject of health, but should wake up minds to the subject" (Robinson, p. 77–78).

During her prolific lifetime, White produced some 125 books and pamphlets, as well as thousands of articles. While she agreed with other health advocates on many issues, she resolved to write out the principles given to her in her visions. Two of her books, The Ministry of Healing (1905), and Counsels on Diet and Food (1938), address nutrition, health, and temperance issues.

White promoted the use of natural remedies, advocated dress reform, promoted moderation, and was a strong guiding force in the development of the Western Health Reform Institute, which would become the Battle Creek Sanitarium. In 1903, when John Harvey Kellogg offered his book The Living Temple as a means to raise money for the rebuilding of the Battle Creek Sanitarium, she objected to both his plans to rebuild and to pantheistic ideas presented in the book.

In later years she was instrumental in providing vision and inspiration for the building of hospitals in Paradise Valley, Glendale, and Loma Linda, California.

White also traveled and spoke to large gatherings throughout her lifetime, spending ten years in California (1881–1891) and nine years in Australia (1891–1900). She then moved to a home near St. Helena, California, where she lived until her death on July 16, 1915.