Italy is a boot-shaped country that protrudes into the Mediterranean Sea. The Alps separate it from the rest of Europe. The island of Sicily is part of Italy and is famous for its cuisine. Spain lies to the west of France and occupies most of the Iberian peninsula. It is separated from France by the Pyrenees Mountains. The remainder of the peninsula is taken up by Portugal, which lies to the west of Spain. Portugal also includes the Azore and Madeira Islands, which are located in the Atlantic Ocean.

The diet of southern Europeans differs from that of northern and eastern Europeans mainly due to the regions that influenced it. The ancient Greeks brought the olive tree to southern Europe, and Spain is now the world's largest producer of olives. Chickpeas and fish stew were also introduced by the Greeks. Different adaptations of this fish stew are now popular dishes in France (boullabaisse) and in Italy (zuppa di pesce alla marinara).

Muslim culture also played a role in the food traditions of southern Europe. Spices (in particular, saffron), oranges, lemons, rice, sugar cane, and several types of sweetmeats were brought to the area by Muslims. Spanish cuisine reflects Muslim tradition in its use of saffron-colored rice and the addition of nuts to sauces and desserts. The Italians often use a sweetened almond paste called marzipan, which came from the Muslims, in their desserts. Italians add saffron to their rice to create dishes such as risotto alla Milanese, popular in northern Italy.

Asia has also added to southern Europe's food traditions, mainly affecting the cuisine of Portugal. Spices (such as pepper and nutmeg) as well as fruits (such as mangoes and bananas) came from Asia. Lastly, the discovery 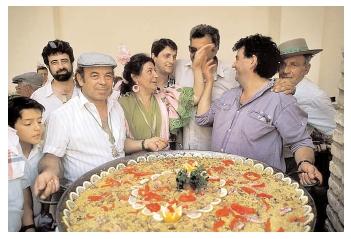 A Spanish celebration featuring paella, a rice and seafood dish served here in a giant paellera. Saffron, a spice from the Muslim countries to the south and east, gives the dish its yellow color.
of the Americas brought new fare to southern Europe, including vanilla, chocolate, pineapple, tomatoes, white potatoes, corn, turkey, and squash.

Similar foods are used across southern Europe. It is mainly the method of preparation and presentation that differs from country to country. Italian cuisine can generally be divided into that of northern and southern Italy. In the north, pasta is made with eggs and shaped in ribbons, while in the south, which is generally poorer, it is made without eggs and in hollow tubes, like macaroni. Northern dishes are served with cream sauces and stuffed with meats and cheeses, while southern dishes are served unstuffed with tomato sauce. People in the north use more meats, dairy, and rice than those in the south, which is known for its use of olive oil, vegetables, and little meat.

The Spanish include a lot of seafood in their diet. Meats are served alongside plenty of vegetables. Soups and stews are staples and are flavored with garlic and tomatoes. Red wine and crusty bread accompany each meal. Portuguese dishes are very similar to those of Spain, but generally include more spices.

The International Conference on Nutrition (ICN) was convened in Rome in 1992 and established the food-based dietary guidelines (FBDG) for Europe. The purpose of the FBDG is to provide dietary guidance to the public. They are based on scientific knowledge, but are presented in a way that assists people in reaching nutritional goals. The southern European diet is fairly representative of these guidelines (see accompanying figure).

Southern Europeans experience less heart disease, stomach and lung cancers, strokes, high blood pressure, diabetes, and obesity than other Western nations. This lower rate of chronic disease has been attributed to diet. The diet of people in this area is similar to that recommended in the American Food Guide Pyramid. It differs mainly in the amount of meat and dairy consumed.

Meals are based on grain products, such as rice, pasta, and bread. In addition, southern Europeans consume large amounts of fruits and vegetables, which provide plenty of vitamins, minerals, and fiber. Red meats, chicken, and eggs are used sparingly. Fish is popular and provides omega-3 fatty acids. A moderate intake of red wine also provides health benefits. Additionally, southern Europeans tend to lead a more relaxed, stress-free life. They often have a post-lunch siesta, which aids proper digestion. They also tend to be physically active.

Although the dietary habits described above are traditionally true, recent trends show that the southern European diet now also includes elements of the Western fast-food craze. A study by Eurostat, the European Commission's statistical branch, found that southern Europeans are getting fatter. Thirty-five percent of Greek males are overweight, as are 32 percent of Spanish males. Thirty-one percent of Greek and Portuguese women are overweight. Rates of high blood pressure, heart disease, and diabetes are increasing.

Southern Europeans have not abandoned their traditional foods; rather, they have added hamburgers and fries to them. In addition, sedentary jobs are on the rise, as fewer people are earning their money through manual labor. Governments of southern Europe don't have the finances to fight this trend. Michele Carruba of the Research Center on Obesity at the University of Milan says that "the advertising budget of Coke alone is more than Italy spends on food research."

Influences on the American Diet

The influence of the southern European diet can be seen in many dishes in the United States. Italian pasta dishes have become a mainstay. Fettuccine Alfredo, lasagne Bolognese, and tortellini can be found in many American restaurants. Soups like pasta e fagiole and cheeses like gorgonzola, parmesan, and mozzarella are popular. Many meals are accompanied by Italian wines, such as chianti, and crusty bread.

Dishes of Spain's southern region can be found in American cooking. Plenty of seafood and vegetables characterize these dishes (such as paella). Fruits and desserts such as rice pudding and flan are also popular in the United States. The influence of Portuguese foods is more subtle, but often characterized by exotic fruits.