South America is the fourth largest continent on the planet, making up 12 percent of the earth's surface. It contains twelve independent nations: Argentina, Brazil, Bolivia, Chile, Colombia, Ecuador, Guyana, Paraguay, Peru, Suriname, Uruguay, and Venezuela. In addition, it contains three territories: The Falkland Islands (Great Britain), French Guiana (France), and the Galapagos Islands (Ecuador). The continent has a very diverse population. There are small pockets of native Indian groups and significant numbers of descendents of Spanish, Portuguese, Italian, German, West African, and East Indians settlers. There also are considerable numbers of Chinese and Japanese. Approximately 90 to 95 percent of South Americans are Roman Catholic.

A high percentage of South Americans live in extreme poverty. Parasitic infection, protein-calorie malnutrition, iron-deficiency anemia, iodine deficiency, and vitamin-A deficiency are common nutritional problems in the rural and urban areas in many South American countries. Heart disease, hypertension, and obesity are also on the rise.

South Americans typically eat three meals and one or two snacks daily. Milk is usually not consumed as a beverage but used in fruit-based drinks and coffee, and milk-based desserts are popular. Fruits, vegetables, and nuts are eaten in abundance. Cassava flour and meal are common in many areas.

Coffee is a major beverage throughout the continent, and South American countries now produce most of the coffee consumed worldwide; Brazil alone produces about a third of the world's coffee. Coffee usually is served concentrated, then diluted with evaporated milk or water. Coffee is consumed heavily in Argentina, Colombia, Ecuador, and Brazil, while tea is popular in Chile and Uruguay. Herbal teas are used as remedies throughout the continent.

Yerba maté (pronounced "yerba mahtay") is a caffeinated, tea-like beverage that is consumed for its "medicinal" properties. Its many health claims include energizing the body, stimulating mental alertness, strengthening the immune system, and aiding weight loss. Maté is consumed mainly in Argentina, Uruguay, Paraguay, and southern Brazil. It is brewed from the dried leaves and stemlets of the perennial tree Ilex paraguarensis. The bombilla is a special metal straw used to drink this brew.

Breakfast is normally a light meal with coffee or tea; bread with butter and jam; and sometimes fruit or fruit juice. Meat and cheese are usually eaten in Brazil and Chile. Lunch is traditionally a heavy meal, and it is followed by a siesta (nap), which helps one recover from both the food and the heat. The siesta is still common among many locals, but the tradition is disappearing from the business day. Appetizers such as fritters and turnovers may start the lunch meal, followed by grilled meat, rice, beans, cassava, and greens. Dinner is another heavy meal, and it often lasts several hours. Dinner usually begins late in the evening, sometimes as late as 9:00 P.M. Desserts are usually simple. Typical desserts are fresh or canned fruits with cheese, a custard called flan, and a milk cake called tres leches. Snacks are readily available from street vendors and bakeries. Popular snacks include turnovers filled with spicy meats, seafood, and vegetables; hot dogs; and steak or meat sandwiches.

Coffee was first brought to the Americas by French colonists in the early eighteenth century. According to legend, the emperor of Brazil dispatched Lieutenant Colonel Francisco de Mello Palheta to obtain seeds of the precious crop from the governor of French Guiana, sending him to the country under the pretext of mediating a border dispute. When the governor refused de Mello's request for seeds, the colonel turned his attentions to the governor's wife, who seems to have launched the entire Brazilian coffee industry by slipping him a few seedlings in a bouquet. Three hundred years later, Brazil produces one-third of the world's coffee.

The cuisine of South America varies from country to country and region to region. The cuisine tends to be a blend of cultural backgrounds, available foods, cooking styles, and the foods of colonial Europeans. Some regions have a largely maize-based diet (often spiced with chili peppers), while other regions have a rice-based diet. Grilled meats are popular. Traditionally, sides of beef, hogs, lamb, and goats are grilled slowly for hours. Another cooking method is to steam foods in a pit oven. For example, in Peru, a pachamanca 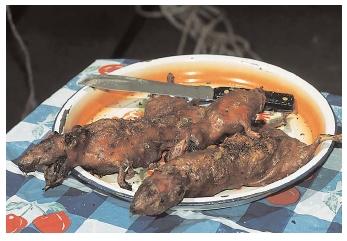 Some of the delicacies found on South American menus are toasted fire ants from Columbia, called hormiga, and these barbecued guinea pigs, or cuy, from Ecuador.
typically includes a young pig or goat (as well as chicken, guinea pig, tamales, potatoes, and corn) cooked under layers of hot stones, leaves, and herbs. Clambakes are popular in Chile.

Quinoa, the seed of the Chenopodium, or goosefoot plant, has been a staple food of millions of native inhabitants, but production declined for centuries after the Spanish conquest in the 1500s. It is used as a grain and substituted for grains because of its cooking characteristics. It became a minor crop due to its decline, and at times it has been grown only by peasants in remote areas for local consumption. In Peru, Chile and Bolivia, quinoa is widely cultivated for its nutritious seeds, which are used in creating various soups and bread, and it is also fermented with millet to make a beer-like beverage. A sweetened concoction of quinoa is used medicinally.

Venezuelan and Colombian foods have Spanish influences. Many foods are cooked or served with olive oil, cheese, parsley, cilantro, garlic, and onions. Hot chile peppers are served on the side of most dishes. Local fruits and vegetables are abundant, and tropical fruits are often dried to make fruit leather. In Columbia, chicken stew and sancocho (a meat stew with starchy vegetables) are popular. One of the most unusual specialties of Columbia is hormiga, a dish made from fire ants. Toasted ants are also a favorite treat during the insect season in June. In Venezuela, cornmeal bread, or arepa, is a staple food. Arepa is cooked on a griddle and is sometimes stuffed with meat or cheese before it is fried. Pabellón caraqueño is also popular. This dish consists of flank steak served on rice with black beans, topped with fried eggs and garnished with plantain chips. Coffee, rum, and beer are common beverages.

These southern countries are major beef producers. Argentineans eat more beef per capita than any other country in the world. Argentina is famous for asados, restaurants specializing in barbecued and grilled meat dishes—mainly beef, but also pork, lamb, and chicken. The national dish of Argentina is matambre, which is herb-seasoned flank steak rolled around a filling of spinach, whole hard-boiled eggs, and whole or sliced carrots. It is then tied with a string and either poached in broth or baked.

Citizens of these southern states enjoy hearty soups and stews daily. Fish soups and stews are popular in coastal Chile. Stews in Argentina often combine meats, vegetables, and fruits. The soups of Paraguay have heavy European influences and include bori-bori, which is a beef soup with cornmeal and cheese dumplings. Pizza, pasta, and meat dishes are popular in these countries. Wines from the midlands of Chile are considered to be some of the best produced on the continent.

Guyanese cuisine is a culinary hybrid with African, East Indian, Portuguese, and Chinese influences. Guyanese usually cook three full meals every day. Rice and roti (flat bread) are staples at lunch and dinner. Fresh cow's milk may be part of the morning or evening meal. A favorite dish is pepper pot, a stew made with bitter cassava juice, meat, hot pepper, and seasoning. Other popular foods are roti and curry, garlic pork, cassava bread, chow mein, and "cook up," a one-pot meal that can include any favorite meats or vegetables. Popular homemade drinks are mauby, made from the bark of a tree, sorrel, made from a leafy vegetable used in salads, and ginger beer. People in French Guiana enjoy an international cuisine, as well as Chinese, Vietnamese, and Indonesian dishes. Imported soft drinks and alcoholic drinks are popular but expensive. Suriname's cuisine has heavy Javanese, Dutch, Creole, Chinese, and Hindustani influences. Beer and rum are popular alcoholic drinks.

The cuisine of Peru and Ecuador is typically divided into the highland foods of the Andes and the lowland dishes of the tropical coastal regions. The cuisine in the mountain areas is the most unique in South America, preserving many dishes of the Inca Indians. Potatoes are eaten at nearly every meal, including snacks. More than 200 varieties of potato can be found in the Lake Titicaca region. They range in color from purple to blue, and from yellow to brown. Size and texture vary as well—some are as small as nuts, while others can be as large as oranges. The foods of Peru and Ecuador feature an abundant use of chile peppers. Salsa de ají, a mixture of chopped chile, onion, and salt is served at most meals. The coastal region is famous for its cerviches, a method for preparing seafood in which the main ingredient is marinated in lime or sour orange.

The natural beauty of South America makes it a popular ecotourism destination. Food-borne and water-borne diseases are the number one cause of illness in travelers. Visitors are therefore advised to wash their hands often and to drink only bottled or boiled water or carbonated drinks in cans or bottles. They also should avoid tap water, fountain drinks, and ice cubes.