Scandinavia is a peninsula in northern Europe that is occupied by Norway and Sweden. Denmark is also generally considered to be part of Scandinavia because of its historical, political, and cultural ties to Norway and Sweden. These three countries are also part of the Nordic countries, which also include Finland and Iceland. With the exception of Denmark and Iceland, these countries are located north of the Baltic and North Seas and share common borders with each other and Russia. All of these countries are part of the Nordic Council. The Nordic countries have historical and cultural ties, and during the Viking era they had a common language and religion. They are also predominantly Protestant countries.

There is a high prevalence of cardiovascular disease (coronary heart disease, stroke, hypertension) in this area, mainly due to the high intake of saturated fats, cholesterol, and sodium. Stomach cancer is also very common due to the high intake of salt and salt-cured foods, especially salted fish. Accidental injuries are the largest cause of death for individuals under forty-five years of age. Suicide and alcoholism are also prevalent, and obesity is on the rise.

Food-borne diseases such as tularemia are endemic in the Scandinavian region. These diseases are transmitted through the handling of undercooked, infected meat. "Mad cow disease" was also identified in cows in this region, and an outbreak of human Salmonella infections in the summer of 2000 was traced to hedgehogs.

The descendants of the Vikings continue to eat many of the foods of their ancestors, and they often prepare them in the same way. Preserved food are very common and include dried, smoked, salted, or pickled fish; dried fruits and jams; and fermented milk. Fresh fruits and vegetables are only available for a few months a year and are dried and stored for the fall and winter months. Strawberries, blueberries, and raspberries abound in the summer. Potatoes are an important staple of the diet and are served in a variety of 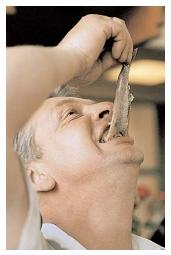 A Dutch man eats raw herring, which is a delicacy in the Netherlands. Seafood is an important part of the Scandinavian diet, but it is not always eaten raw. Popular preparations include smoking, drying, pickling, and salting.
ways, including as pancakes. Other staples include fish, seafood, mutton, cheese, cabbage, apples, onions, berries, nuts, and bread. Bread is often made with rye, and both leaven and unleavened varieties are common.

Scandinavians eat simple, hearty meals. They generally eat three meals a day, plus a coffee break. Breakfast is light and usually includes bread or oatmeal porridge, fruit, eggs, cheese, herring, or potatoes. Fruit soup is a popular breakfast item in the winter and is topped with cream and served with bread and cheese.

Smorgasbords (bread and butter buffet tables) are popular at lunch in Scandinavia. In Denmark, open-faced sandwiches are made from the buffet table and eaten with a knife and fork. Buttered bread is topped with items such as sausage, herring, smoked salmon, boiled potatoes, cheese, and tomatoes. Such sandwiches are also served as a late-afternoon or bedtime snack. In Sweden, the buffet table offers a large variety of both hot and cold dishes. The Swedes eat herring first, followed by other fish dishes. Meats, salads, and hot dishes then follow (in that order), and dessert is eaten last. Dinner usually has several courses, including appetizer, soup, entrée, vegetables, and dessert. Pea soups served with pancakes are popular dinner items in the winter.

Desserts are rich but not overly sweet. Popular desserts include pancakes with preserves, fruit pies, and pastries. Danes are internationally known for their pastries, and Swedes are known for their butter cookies. Beverages served with meal include milk, coffee, tea, beer, schnapps, dry sherry, sweet Madeira, port, or aquavit (water of life). Aquavit (also called akavit, aquavite and akvavit) is an alcoholic beverage made from a grain or potato mash that is double-distilled. The second distillation features the addition of various flavorings such as caraway (most common), cumin, cardamom, lemon peel, aniseed, or fennel. Aquavit is generally not aged, and it is usually drunk straight and chilled, from a small chilled glass. It is a popular drink at smorgasbords.

Dairy products (from cows, goats, and reindeer) are heavily consumed. In addition to drinking milk, Scandanavians also have a high intake of sour cream, buttermilk, and cheese. Cheese is generally served at every meal. Cheese from this region of the world is popular internationally and includes Danish Blue and Havarti from Denmark, Herrgardsost and Svecia from Sweden, and Gammelost and Gjeitost (brown goats cheese) from Norway.

Fish is a major staple in the diet, and Scandinavia is the largest supplier of fish in Europe. The region is one of the largest exporters of dried salt cod in the world. Sweden is famous for its crayfish, Denmark for its oysters, and Norway for its lobsters and prawns. Smoked and cured fish (e.g., herring, mackerel, cod, salmon, and eel) are produced commercially for both the domestic market and for exporting. Cured cod is traditionally prepared for Christmas in Norway and Sweden and served with pork fat and bacon.

Historically, meat was in limited supply, so it was often combined with other ingredients. The famous Swedish meatballs and the Danish fricadeller (patties made of ground beef, lamb, and pork) came out of this tradition. Today, the Scandinavians are hearty meat eaters. Pork is the favorite meat in Denmark, a country that has as many pigs as people. Scandinavians also hunt wild birds, elk, deer, and bear, just as their Viking ancestors did. Even a few 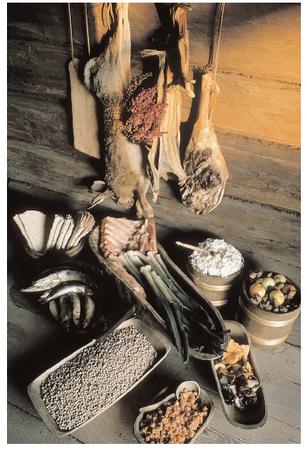 Long winters and short summers limit the fruits and vegetables available to Scandinavians. Their diet tends to be high in fat and salt, and includes such exotic fare as reindeer milk, whale steak, and lutefisk.
of the more esoteric tastes of the Vikings live on. Norwegians love whale steak and claim that it tastes as good as beef. Smoked horseflesh is also popular with the Swedes—they call it "hamburger" and buy it thinly sliced.

Christmas is a welcome holiday during the long Scandinavian winter. Traditional foods eaten on Christmas Eve are rice porridge, fresh cod, and lutefisk. Rice porridge is served with cinnamon and sugar and has one hidden blanched almond. The person who finds the almond is believed to be blessed with good luck for the following year. Lutefisk is boiled cod (treated in a lye solution); it is served with a white sauce, melted butter, green peas, boiled potatoes, and mustard. Christmas Day dinner features ham or pork served with red cabbage or sauerkraut. The Danes usually serve goose on Christmas Day.

In Norway, Christmas festivities begin weeks before the holiday. Most families brew a Christmas beer called juleol. They also cook traditional pork dishes, bake biscuits, cookies, cakes, and julekake, a sweet bread filled with raisins, candied peel, and cardamom. Swedes have a month-long Christmas celebration that begins on December 13, the feast of St. Lucia. Christmas is celebrated on December 24 with rice pudding and ginger cookies. In Denmark, the Christmas feast is held at midnight on Christmas Eve.

Midsummer's Day (June 24) is another popular holiday in Scandinavia. It features maypole dancing, feasting, and bonfires. Fish, such as herring and cured salmon (gravlax), along with boiled new potatoes are common. In Norway, a cream pudding (rommegrot) is served with cinnamon and sugar. In Sweden, wild strawberries are eaten.