Premenstrual syndrome (PMS) is characterized by emotional and physical symptoms that can be troubling and cause moderate discomfort for women the week or two before the onset of their menstrual cycle. PMS is estimated to affect up to 40 percent of reproductive-aged women. Approximately 5 to 10 percent of these women experience symptoms so severe that it totally impairs their everyday lifestyle. This severe form of PMS is known as premenstrual dysphoric disorder (PMDD). The precise etiology of PMS is still unknown; however, it is increasingly believed that the sensitive equilibrium between female sex steroids (the hormones estrogen and progesterone) and neurotransmitters in the brain is altered in women with PMS.

With a wide range of symptoms, both emotional and physical, the first step in successfully treating PMS is for a woman to recognize the changes in her body and mood. Keeping a close record of symptoms, their severity, and the dates they occur within the menstrual cycle is an important tool. Discussing this with a gynecologist can lead to a very successful treatment plan. 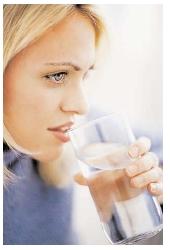 Up to 40 percent of reproductive-aged women experience symptoms of premenstrual syndrome (PMS). Eating certain foods and drinking plenty of water may help alleviate some of the discomfort of PMS.

A woman is diagnosed with premenstrual syndrome if she has at least one emotional and one physical symptom during the five days before the onset of her period for three consecutive menstrual cycles. The specific symptom is not as important for diagnosis as is the cyclic fashion in which it appears. Emotional symptoms include minor fatigue, depression, angry outbursts, irritability, anxiety, confusion, social withdrawal, mood swings, and crying spells. Physical symptoms include headaches, bloating, acne, appetite changes and cravings, breast tenderness, and swelling of extremities.

To help alleviate the symptoms of PMS, many treatments, both traditional and alternative, are being sought by thousands of women daily. According to some experts, the majority of PMS symptoms are a result of hormonal imbalances where there is too much estrogen in the body in comparison with the amount of progesterone. Studies have shown that a number of foods, such as, soy, vegetables and fruit, and nuts and seeds can actually help with hormonal balance. PMS sufferers are advised to increase their intake of fruits, vegetables, whole grains, low-fat dairy products and omega-3 fatty acids (mostly found in seafood and nuts). Eating small, frequent meals at the same time each day can help reduce bloating and fullness.

Several clinical trials have shown that supplementation of calcium and magnesium can play a crucial role in the prevention of PMS. Nine hundred to 1,200 milligrams of calcium per day was found to be effective in reducing food cravings and mood swings, and 200 to 500 milligrams of magnesium reduced bloating and breast tenderness. Studies of vitamin B6 and vitamin E intake have had varied results. A daily multivitamin-mineral supplement is believed to be beneficial for all PMS sufferers.

Besides additions to the diet, it is suggested that women suffering from PMS should avoid caffeine, in the form of soft drinks, coffee, or chocolate; refined sugars; sodium; and saturated fats. Drinking plenty of water is a complement to cutting back on sodium. The effects of alcohol are usually magnified in premenstrual women, and therefore it is also advised that alcohol consumption be decreased or stopped totally.

Scientific studies have shown that any type of physical exercise can help improve mood, decrease anxiety, and reduce stress reactions. As little as twenty to thirty minutes of aerobic type exercise three to five times a week, such as brisk walking, has shown to decrease some PMS symptoms. Some studies have also shown that doing nonaerobic exercises may also work, but to a smaller degree.

Based on some preliminary scientific research, the herb chasteberry, also known as vitex agnus-castus, has been shown to relieve several PMS symptoms. According to a clinical trial, reported in January 2001 in a European scientific journal, more than half the women who received 20-milligram chasteberry tablets had a significant improvement in all their symptoms except bloating. Black cohosh and evening primrose oil are other herbs that are gaining popularity, though studies to date are inconclusive.

Some studies have shown that women with PMS who are treated with bright-light therapy can have a substantial improvement in their mood. Bright-light therapy consists of sitting under a bright light of predetermined intensity for thirty minutes for one to two weeks before the onset of a menstrual cycle.

Pharmacologic. Since premenstrual symptoms are thought to be related to the changing levels of estrogen and progesterone, these hormones were among the first to be tested as a possible treatment. Although some early research reported positive findings, more recent studies have revealed that progesterone, whether natural of artificial, is not successful in the management of PMS.

A form of pharmacologic treatment that has shown positive results is the suppression of ovulation, which eliminates both the cyclic rhythm of hormone production and eliminating cyclic mood symptoms. The most common medications used for ovulation suppression are gonadotropinreleasing hormone (GnRH) agonists. Currently, the use of GnRH agonists is experimental; however, studies have shown that 75 percent of women treated with GnRH agonists have experienced reductions in tension, depression, mood swings, and breast tenderness.

Evidence from numerous controlled trials has clearly demonstrated that low-dose selective serotonin reuptake inhibitors (SSRIs) also have excellent efficacy with minimal side effects in treating women with severe PMS symptoms. SSRIs are a group of medications primarily used in treating depression and anxiety disorders. These medications have been shown to be best taken during the luteal phase of the menstrual cycle only.

Premenstrual syndrome, and its effect on millions of women, received a lot of attention during the 1990s, and many treatment modalities have emerged. The first step is for a woman to identify her symptoms and seek professional help. Through many available treatments, both traditional and alternative, and lifestyle changes such as diet and exercise, women no longer have to suffer so severely on a monthly basis. Research in this area is still needed, however, and more treatments need to be explored.

American College of Obstetricians and Gynecologists. "Dealing with PMS." Spotlight on Women's Health. Available from <http://www.acog.com>