The Pacific Ocean—the world's largest ocean—extends about 20,000 kilometers from Singapore to Panama. There are 789 habitable islands within the "Pacific Islands," a geographic area in the western Pacific comprising Polynesia, Melanesia, and Micronesia. Polynesia includes 287 islands and is triangular, with Hawaii, New Zealand, and Easter Island at the apexes. Other major Polynesian islands include American (Eastern) Samoa, Western Samoa, Tonga, Tahiti, and the Society Islands. The Hawaiian Islands have been studied more than most other Pacific islands primarily because Hawaii is part of the United States of America. The Melanesian Islands (Melanesia) include the nations of Fiji, Papua New Guinea, Vanuatu, the Solomon Islands and New Caledonia (a French dependent). The 2,000 small islands of Micronesia include Guam (American), Kiribati, Nauru, the Marshall Islands, the Northern Mariana Islands, the Gilbert Islands, Palau, and the Federated States of Micronesia. Migration is very fluid between Polynesia, Melanesia, and Micronesia, and many Pacific Islanders also migrate to the United States and other countries. Pacific Islanders are a racially and culturally diverse population, and the people of the islands follow a wide variety of religions.

Mortality and morbidity statistics are limited, mainly because data on Pacific Islanders are often included with those on other Asians. A high percentage of Pacific Islanders live in poverty, though nutritional deficiencies are rare when there are adequate calories. Because Pacific Islander diets are based on whole foods found in nature and prepared without excess cooking, the recommended daily amounts of many vitamins and minerals can be met in only one meal. In addition, all of the fresh fruits consumed (mainly in the morning and during the afternoon) are abundant in nutrients.

Anemia, riboflavin deficiency, and calcium deficiency are common nutritional problems in the rural and urban areas of many islands, while heart disease, hypertension, type 2 diabetes, obesity, and other chronic diseases are on the rise. This is primarily due to a transition from traditional nutritious diets of fresh fruits, vegetables, poultry, and seafood to a diet with large amounts of imported and highly refined Western foods that are low in fiber and high in fat and sugars. Cigarette smoking, an increase in alcohol consumption, and a decreased level of physical activity are also contributing factors.

Obesity among Pacific Islanders is among the highest in the world, regardless of the island. Obesity may be due to a genetic predisposition and a cultural preference toward being heavy, but there is a high prevalence of physical inactivity among this population. Attitudes toward obesity are slowly changing, however, and it is gradually being viewed as unhealthy. Small studies that have placed obese and diabetic individuals on traditional diets have shown very good results, as individuals lost weight and diabetics were able to reduce or eliminate the need for insulin.

While the islands are geographically close, the Pacific Island region is racially and culturally diverse. The cuisine varies slightly from island to island and is a blend of native foods with European, Japanese, and American influences. The cuisine is also influenced by the Asian Indians, Chinese, Korean, and Filipino agricultural workers who arrived in the eighteenth century. Food plays a central role in Pacific Islander culture; it represents prosperity, generosity, and community support. Hospitality is extended to visitors, who are usually asked to share a meal. Even if a visitor is not hungry, he or she will generally eat a small amount of food so that the host is not disappointed. Food is also often given as a gift, and a refusal of food is considered an insult to the host or giver. 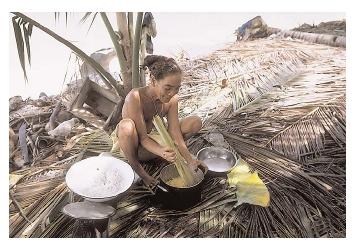 Breadfruit (being prepared here) is one of many starchy fruits traditionally eaten by Pacific Islanders. The diet also includes abundant fresh vegetables, fish, and nuts.

Fruits, fruit juices, vegetables, and nuts (e.g., peanuts, macadamia, and litchi) are eaten in abundance, while milk and other dairy products are uncommon (there is a high prevalence of lactose intolerance among Pacific Islanders). Coconuts are plentiful, and both the milk and dried fruit are used to flavor meals. Pigs, chickens, and cows exist on the Pacific Islands, but in areas like Fiji they are expensive, so local villagers tend to purchase them only for large celebrations and feasts. Modern conveniences exist in many areas, but it is not uncommon for villagers to cook on outdoor fires or kerosene stoves. Many villagers still eat with their hands, and a bowl of water is provided for washing hands (a guest may request one before the meal if it is not offered).

Pacific Islanders typically eat three meals a day. Breakfast usually includes cereal and coffee, while traditional meals are eaten for lunch and dinner. However, in areas such as Hawaii, Samoa, and Guam, traditional foods now contribute only minimally to daily intake, most of which is made up of imported foods or fast food.

The traditional Pacific Islander diets are superior to Western diets in many ways. The weaknesses of the traditional Pacific Island diets are minimal and the strengths are immense. Traditional foods are nutrient-dense, meals are prepared in healthful ways, and oils are used sparingly. The high-fiber, lowfat nature of these diets reduces the risk for heart disease, hypertension, stroke, diabetes, obesity, and certain types of cancer.

Starchy foods are the foundation of the traditional diet. For example, the traditional Hawaiian diet is 75 to 80 percent starch, 7 to 12 percent fat, and 12 to 15 percent protein. Starch in the diet comes primarily from root vegetables and starchy fruits, such as taro, cassava, yam, green bananas, and breadfruit. In addition, the traditional diet is plentiful in fresh fruits, juices, nuts, and the cooked greens of the starch vegetables (e.g., taro, yam). Traditional meals include poi (boiled taro), breadfruit, green bananas, fish, or pork. Poi is usually given to babies as an alternative to cereal. Many dishes are cooked in coconut milk, and more than forty varieties of seaweed are eaten, either as a vegetable or a condiment. Local markets with fresh foods are still abundant in most islands.

As expected, fish and other seafood are abundant in the Pacific Islands and are eaten almost every day in some islands. Most fish and seafood are stewed and roasted, but some are served marinated and uncooked. Pork is the most common meat, and it is used in many ceremonial feasts. Whole pigs are often cooked in pits layered with coals and hot rocks. Throughout the Pacific Islands, pit-roasted foods are used to commemorate special occasions and religious celebrations. The part of the pig one receives depends on one's social standing.

Samoans usually welcome visitors with a kava ceremony. Kava is made from the ground root of a pepper plant and is mixed with water. It is strained and usually served in a stone bowl or a half of a coconut shell. It looks like dirty water and tastes somewhat like dirty licorice. Guests are expected to drink it in one gulp. In Hawaii, luaus are common. A luau usually features pit-roasted pig, chicken, fish, and vegetables.

Traditional meals are highly seasoned with ginger, lime or lemon juice, garlic, onions, or scallions, depending on the dish. Lard and coconut oil (both saturated fats) are the most common fats used in cooking and give foods a distinctive flavor. Traditional beverages include fruit juices, coconut water, local alcoholic concoctions, and teas (primarily introduced by Asian immigrants).

Many Pacific Islanders have moved to a more Western diet consisting of fast foods and processed foods, and as a result the incidence of both obesity and diabetes have soared. Pacific Islanders now rely on imported foods that are highly processed, such as white flour, white sugar, canned meat and fish, margarine, mayonnaise, carbonated beverages, candies, cookies, and breakfast cereals. Many locals sell their fruits and vegetables and then in turn purchase imported foods. On many islands, 80 to 90 percent of the foods are now imported. Imported rice is becoming the staple food in some areas, instead of locally grown provisions, and the ability to purchase imported foods is now a status symbol. Agricultural production also plays a role in the dietary transition. Local fruits and vegetables are increasingly less available due to population growth, urbanization, exporting of produce, and selling produce to hotels for the tourism industry. Traditional methods of hunting and gathering wild food, farming, processing, storing, and preserving traditional foods have all but disappeared in some areas.

Even though the health focus has been on the increase in obesity and diabetes, a different problem has occurred in Fiji. A dramatic increase in disordered eating among teenage girls has been observed in this nation, beginning with the introduction of television in 1995. In 1998 a researcher on Fiji reported that:

Many health professionals in the Pacific Islands, especially Hawaii, are now emphasizing eating traditional foods and encouraging residents to get back to a healthy lifestyle and to their cultural roots. Programs may now need to be developed to target eating disorders and disturbances.

The natural beauty of the Pacific Islands makes them popular destinations for ecotourists, and food-borne and water-borne diseases are the number one cause of illness among travelers. Visitors are therefore advised to wash their hands often and to drink only bottled or boiled water or carbonated drinks in cans or bottles. They also should avoid tap water, fountain drinks, and ice cubes.