In response to a need to standardize the use of such terms as organic and natural, the U.S. Congress passed the Organic Foods Production Act of 1990, which established the U.S. National Organic Standards Board (NOSB). In 1995, the NOSB defined organic agriculture as "an ecological production management system that promotes and enhances biodiversity, biological cycles and soil biological activity. It is based on minimal use of off-farm inputs and on management practices that restore, maintain and enhance ecological harmony." Organic production uses "materials and practices that enhance the ecological balance of natural systems and that integrate the parts of the farming system into an ecological whole," though such practices "cannot ensure that products are completely free of residues" of pesticides, herbicides, and other additives or contaminants. However, "methods are used to minimize pollution from air, soil, and water. Organic food handlers, processors, and retailers adhere to standards that maintain the integrity of organic agricultural products. The primary goal of organic agriculture is to optimize the health and productivity of interdependent communities of soil life, plants, animals and people" (NOSB).

Certification and Labeling of Organic Foods

According to regulations set forth by the United States Department of Agriculture (USDA), organic foods must come from farms or ranches certified by a state or private agency that has been accredited by the USDA. Foods labeled "100 percent organic" must contain only organically produced ingredients, excluding water and salt. Foods labeled "organic" must contain, by weight, at least 95 percent organically produced ingredients. Products meeting these requirements must display these terms on their principal display panel and may use the USDA seal and the seal or mark of certifying agents on packages and in advertisements. Foods labeled "made with organic ingredients" must contain, by weight, at least 70 percent organic ingredients. Up to three separate organic ingredients may be listed on the principal display label, and a certifying agent's seal or mark may be used on the package. The use of a USDA seal is prohibited, however. Livestock can be certified "organic" if they have been raised on organic foodstuffs for over one year.

Other labeling provisions include:

Over ninety private organizations and state agencies (certifying agents) currently accredit farms that produce organic food, but standards for growing and labeling organic food may differ. For example, different agencies may permit or prohibit the use of specific natural pesticides or fertilizers in growing organic food. In addition, some of the language contained on seals, labels, and logos approved by organic certifiers may differ. 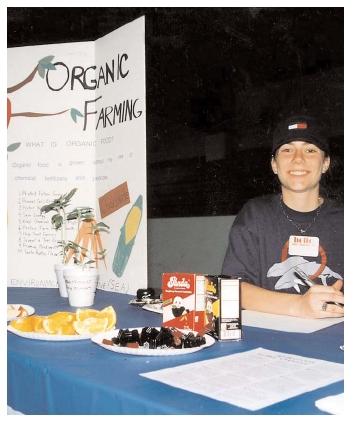 Science has not proven any nutritional difference between organically grown foods and conventionally grown foods. However, the methods employed by organic farmers may be more sustainable in the long term than conventional farming.

The Market for Organic Foods

The global market for organic foods is expected to expand from $26 billion in 2001 to $80 billion in 2008. The greatest market growth has been in the European Union, where market revenues were forecast to expand by a third in 2001 to reach $12 billion, largely due to growth in Germany, Italy, France, and the United Kingdom. In all these countries, except the United Kingdom, growth has resulted from organic foods moving into mainstream marketing channels and from increased consumer interest. Japan is the third largest market for organic foods and accounts for the bulk of Asian organic market revenues. High growth is also occurring in Singapore, Hong Kong, and Taiwan, though these markets remain much smaller than the Japanese market.

The U.S. organic foods marketplace reached $6.95 billion in sales in 2001, up 19 percent from 2000. Sales are expected to increase in the United States, reaching $20 billion by 2008. The largest market for organic products worldwide is in fresh produce. Other popular organic foods include soy foods, meat, poultry, eggs, and meat and dairy alternatives. 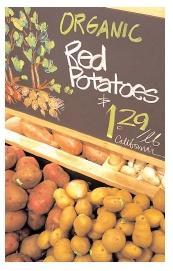 Fresh produce is the top-selling organic food, but organic dairy products are rapidly gaining popularity. Organic foods can be significantly more expensive than their conventionally grown counterparts, and research has not proven that health reasons alone justify their cost.

The nutrient content of plants is determined primarily by heredity, and organic foods generally contain no less fat or sodium, or more vitamins, minerals, or fiber, than the same food grown using conventional methods.

However, organic farming methods can enhance soil fertility, resulting in an increased concentration of some minerals and phtyochemicals in organic food. Organic food cannot be guaranteed pesticide-free, though organic farmers use only naturally occurring pesticides such as sulfur, copper, nicotine, and Bacillus thuringiensis (a naturally occurring bacterial disease of insects). Organic foods may contain pesticide residues that have drifted from farm to farm, or residual pesticides found in soil or water, though the amounts of such residues are certainly greater in conventionally produced foods, where pesticides are directly applied to the crops.

Furthermore, there is no evidence of consistent differences in appearance, flavor, or texture between organic foods and conventionally produced foods. Organic foods may be more susceptible to microbiological contamination. Several food-borne illness outbreaks resulting from Salmonella enteriditis, Listeria monocytogenes, and E. coli O157:H7 have been associated with consumption of organically grown produce.

Organic foods can be more costly than conventionally grown foods. The USDA Economic Research Service, in USDA/ERS Food Cost Review 1950–97, reports that in 1995 an average American household with two parents and two children spent $6,992 on food. Purchasing only organic foods would increase total food costs by $4,000 to $10,977 per year. However, as the organic market grows, the cost is likely to continue to drop.

Organic agriculture is generally seen to be environmentally friendly. Organic agriculture decreases the amount of nitrogen-containing chemicals that seep into groundwater supplies, decreases soil deterioration via crop rotation, and minimizes exposure of farm workers and livestock to potentially harmful compounds. However, use of animal manures may increase the risk of food-borne illness, and a dependence on nitrogen-fixing, green-manure crops uses large amounts of land. On the other hand, these methods can make nutrients more available to subsequent crops, increase crop productivity, and conserve water resources.

Many kinds of pesticides, including insecticides and herbicides, are commonly used in producing and marketing the food supply. High doses of some of these chemicals have been shown to cause cancer in laboratory animals, though the low concentrations found in some foods are generally well within established limits. Environmental pollution by slowly degrading pesticides can lead to food-chain bioaccumulation and persistent residues in body fat. These residues may increase the risk for certain cancers. Studies have shown that concentrations in tissues are low, and the evidence has not been conclusive. Continued research regarding pesticide use is therefore essential to insure food safety, improved food production, and reduced environmental pollution.

Sensible food practices can significantly reduce pesticide residue on foods. Such practices include washing and scrubbing fresh produce under running water, peeling and trimming produce when possible, removing the outer leaves of leafy vegetables, and trimming fat from meat and skin from poultry and fish. Eating a variety of foods from a variety of sources will reduce the likelihood of exposure to a single pesticide.

Organic foods are produced with ecologically based practices, such as biological pest management and composting. To be labeled "organic," foods must have been produced on certified organic farms and conform to established labeling requirements. From a scientific viewpoint, organic foods are no safer or nutritious than conventionally produced foods. Most major health organizations maintain that the health benefits of consuming a diet rich in fruits, vegetables, and whole grains significantly outweigh any health risk from residual pesticide, herbicide, or fertilizer consumption. According to the American Institute for Cancer Research, there is no convincing evidence that eating foods containing trace amounts of chemicals such as fertilizers, pesticides, herbicides, and drugs used on farm animals increases the risk for cancer. Organic agriculture provides consumers with an additional choice when purchasing food, however, and also provides some assurance of where a food was produced and how it was produced.

Bourn, D., and Prescott, J. (2002). "A Comparison of the Nutritional Value, Sensory Qualities, and Food Safety of Organically and Conventionally Grown Produced Foods." Critical Reviews in Food Science and Nutrition 42(1):1–34.