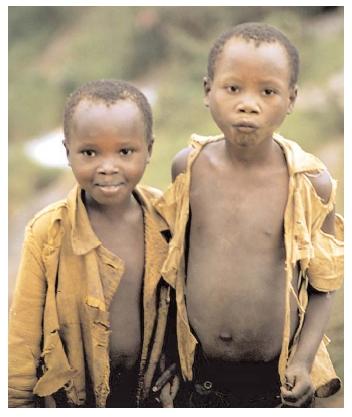 Children between 10–19 years of age face serious nutritional deficiencies worldwide, according to the World Health Organization. About 1,200 million, or 19 percent of adolescents suffer from poor nutrition that hurts their development and growth.
to a variety of health problems, the most prevalent of which are anemia, beriberi, osteoporosis, pellagra, and rickets. Anemia occurs when the body does not have enough red blood cells to transport oxygen from the lungs to the body's cells. The most common symptom of anemia is a constant feeling of fatigue. Making sure that one's diet contains the proper amounts of iron, folate, and vitamin B12 can prevent anemia.

Osteoporosis is an asymptomatic condition in which the loss of minerals can cause the body's bones to become porous and fragile. Making sure that one's diet contains the recommended amount of calcium and vitamin D can reduce the risk of developing osteoporosis.

The niacin-deficiency disease, pellagra, can produce symptoms such as dermatitis, dementia, diarrhea, and even death. Pellagra can be prevented through eating almost any protein-rich foods.

Rickets, or defective bone growth, is the result of an excessive vitamin D deficiency. It has been virtually wiped out in the United States due to the vitamin D fortification of milk.