The U.S. National Institutes of Health (NIH) are charged with the vital mission of uncovering new knowledge that will lead to better health for everyone. To carry out this ambitious task, the NIH has become the largest agency for biomedical research in the world. It consists of twenty-seven separate institutes and centers and has a multibillion-dollar budget. However, it did not start out this way.

History of the National Institutes of Health

In 1887, the NIH began in Staten Island, New York, as a one-room federal laboratory within the Marine Hospital Service (MHS). At the time, it was called the Laboratory of Hygiene. The MHS was responsible for preventing the spread of infectious disease in the United States. For example, the staff at the MHS examined passengers on arriving ships for signs of communicable diseases such as cholera and yellow fever. By 1891, the federal government required the MHS to take on the additional responsibilities of developing and testing vaccines. That year, the service was relocated to Washington, D.C., and renamed the Hygienic Laboratory.

In 1902, Congress passed the Biologics Control Act to regulate vaccines sold in the U.S. This resulted in the Hygienic Laboratory adding divisions in chemistry, pharmacology, and zoology, all on a meager annual budget of $50,000. After ten years, this enterprise, now called the U.S. Public Health Service (PHS), was further authorized to study chronic diseases (e.g., heart disease, diabetes, and cancer) and infectious diseases (e.g., tuberculosis, influenza, and malaria). Despite working with limited funds, its investigators made several remarkable medical discoveries during this period. For example, in 1920, Joseph Goldberger discovered that pellagra, a skin disease widely considered to be infectious, was in fact the result of a vitamin deficiency that could be prevented by proper nutrition.

Pursuing the Mission of NIH

The activities of the NIH are overseen by the Public Health Service, which, in turn, is directed by the U.S. Department of Health and Human Services. However, the mission, goal, and activities of NIH distinguish it as a unique federation of biomedical research institutes. In pursuit of its broader mission, the specific goal of the NIH is to acquire biomedical knowledge that will enable researchers and practitioners to prevent, control, detect, and treat disease and disability. To achieve this goal, the NIH directs a number of programs and activities, including: (1) conducting research at the facility; (2) supporting scientific explorations of investigators in other settings (e.g., universities, medical schools, clinical centers) nationwide and internationally; (3) providing training for researchers; and (4) fostering the dissemination of medical information. The Office of the Director (OD) sets policy for planning, managing, and coordinating these programs and activities.

Within the OD is the Office of Legislative Policy and Analysis (OLPA). OLPA is responsible for making sure that the results of all of this research inform public policy and public health laws. To this end, the OLPA supervises legislative analysis and policy development, and also acts as a liaison between the NIH and Congress. As a result of the OLPA's participation in congressional hearings, for example, the Dietary Supplement Health and Education Act (DSHEA) was authorized in 1993. Consequently, the NIH established the Office of Dietary Supplements to conduct and coordinate research relating to dietary supplements and their impact on the health of the public.

The Institutes and Centers

To support its mission, the NIH has developed into a broad and complex federation consisting of a total of twenty institutes and seven centers. Each institute and center has its own medical or public health focus with well-defined priorities. For example, some institutes concentrate on a particular disease area (e.g., cancer, diabetes) whereas others support biomedical research (e.g., promoting diversity, providing medical resources).

One of the NIH's institutes is the famous U.S. National Library of Medicine (NLM), the world's largest medical library, holding nearly six million items, such as books, professional journals (e.g., Science and Nature), and photographs. A plethora of resources and search engines, including PubMed and MEDLINEplus, provide access to these materials through the World Wide Web.

In general, the institutes' research priorities are shaped by two things: (1) epidemiological assessments (i.e., studies of the distribution and determinants of diseases and injuries in populations), and (2) political pressure. In some cases, political concerns have affected plans for specific research directions regardless of the results of epidemiological assessments. For example, a wide variety of research supports the idea that stem cells (undifferentiated cells taken from human embryos) have great potential to reduce the burden of illness (stem cells can be used to create other body cells, such as blood cells, or to regenerate tissue, bone, and muscle). However, despite the potential value of these applications, political concerns have threatened to end funding for this kind of research. On August, 9, 2001, President George W. Bush announced his decision to allow federal funds to support research on existing human embryonic stem cell lines under certain limited conditions.

Because much of the research supported by the NIH is conducted on human subjects, the NIH has several offices and programs in place to protect participants and address bioethical research issues. For example, to protect the rights and welfare of human subjects, the NIH has established at least fourteen separate Institutional Review Boards (IRBs). IRB committee members must review, and approve, all human-subject research activities prior to, and throughout, a study. Each principal investigator (the scientist in charge of directing a research project) must prove to the IRB that all of their human subjects provided informed consent before participating in study procedures. In addition, researchers must ensure the privacy of their participants is protected and their data are kept confidential.

Accomplishments of the NIH

The NIH supports thousands of research projects every year. A small sample of the accomplishments from 2003 includes the following:

In addition to offices that protect research participants, the NIH contains a number of offices that address ethical concerns and appraise the potential social consequences of scientific pursuits. For example, the Office of Science Policy (OSP) advises the NIH director on policy issues that affect the 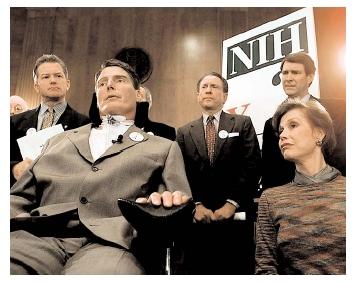 In 1998 the U.S. Congress committed to increase the budget of the National Institutes of Health to more than $27 billion. A press conference calling for the increase featured entertainers Christopher Reeve and Mary Tyler Moore.
research community. In addition, OSP coordinates the Trans-NIH Bioethics Committee (T-NBC), composed of scientists, ethicists, and IRB members. This group is explicitly responsible for developing policies and considering the ethical, legal, and social implications of NIH-funded research.

The NIH's important role in health and medical research and training is reflected in a yearly budget of 23 billion dollars (as of fiscal year 2002), a sum generated almost entirely through taxes. Today, the NIH uses these funds to support over thirty thousand research projects conducted on the main campus (intramural) and away from campus (extramural) at universities, medical schools, and independent research institutions.

Although the intramural research conducted at the NIH is important, nearly 80 percent of the NIH's budget is spent on extramural grants to investigators and research institutions throughout the nation and the world. The grants program seeks to stimulate the discovery of biomedical knowledge by encouraging qualified scientists to participate in particular types of research. In addition, research grants and contracts guarantee that facilities, equipment, and human resources are available to conduct research.

Nationwide and internationally, over fifty thousand researchers have been awarded grants to conduct their studies away from NIH's main campus. Together, these researchers have made more scientific breakthroughs than could be listed in this book. Some noteworthy examples, however, include: (1) the discovery that antiretroviral drugs could prevent transmission of the HIV virus from mother to infant, (2) demonstrating that weight loss 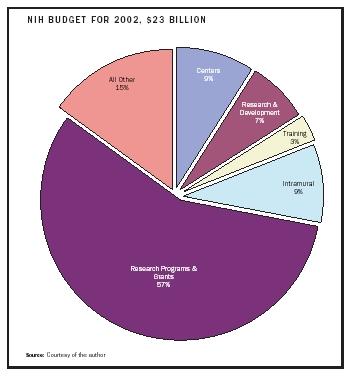 and restriction of dietary salt reduce the need for blood pressure-lowering drugs, (3) confirming that tight control of blood glucose (sugar) may help people living with diabetes prevent complications such as blindness, and (4) identifying leptin (a product of the "obesity" gene) and suggesting how it might be used to combat obesity in humans. A number of extramural investigators have also been honored with the Nobel Prize for their significant contributions to biomedical science. For example, the 1985 Nobel Prize in Physiology or Medicine was awarded jointly to Drs. Michael S. Brown and Joseph L. Goldstein for their discoveries concerning the regulation of cholesterol metabolism and its role in heart disease.

In addition to this work, research scientists, physicians, dentists, veterinarians, and nurses conduct more than two thousand intramural projects on the NIH campus. Several of these investigators have also received international attention for their discoveries. Currently, three Nobel laureates work at the NIH: Dr. Marshall W. Nirenberg (honored in 1968 for finding the key to cracking the genetic code), Dr. Julius Axelrod (honored in 1970 for discoveries concerning chemical transmitters in the nervous system), and Dr. D. Carleton Gajdusek (honored in 1976 for identifying the cause of kuru, a fatal infectious disease that affects the nervous system). Today, intramural researchers continue to work on projects that will, ultimately, improve the health of the public.

Since its humble beginning as a one-room laboratory of hygiene, the NIH has become the largest biomedical research enterprise in the world. This well-funded public program has enabled scientists to make tremendous strides in preventing, controlling, detecting, and treating disease. Still, there are enduring questions for researchers at each of the twenty-seven institutes and centers to tackle, such as ways to prevent and treat cancer, heart disease, blindness, arthritis, diabetes, Alzheimer's disease, depression, drug misuse, and AIDS. To pursue these and other issues, every year the NIH posts hundreds of requests for proposals (RFPs), encouraging scientists to submit grant proposals on different topics. At the beginning of the twenty-first century, the NIH is especially interested in supporting research that will improve the health of infants and children, women, older adults, and minorities. Future projects will help scientists, practitioners, and educators better understand how biological processes, behaviors, and lifestyle practices impact health and disease. For example, more will certainly be learned about nutrition-related illnesses and how diet influences gene expression. By directing research in these areas, the NIH is leading the way to better health for everyone.