Young girls start menstruating between the ages of eleven and thirteen, when their reproductive systems reach maturity. Women have regular menstrual cycles every twenty-eight days until about the age of fifty, at which time menstruation becomes irregular. This irregularity signals the start of menopause. The natural cessation of menstruation occurs due to reduced production of the female hormones estrogen and progesterone, which generally occurs between the ages of forty and fifty-five. The age at which a woman enters menopause is affected by genetics, race, and environmental factors. Women can also go into premature menopause, either naturally or due to oophorectomy (the surgical removal of the ovaries).

The lack of estrogen and progesterone causes many changes in women's physiology that affect their health and well-being. These changes include:

Some other transient but unpleasant symptoms of menopause include hot flashes, fatigue, anxiety, sleep disturbance, and memory loss.

Treatments and Remedies: Benefits and Disadvantages of Each

Menopausal women are faced with many choices in terms of treatment or remedies for these problems. Some of the treatment choices are experimentally proven to be effective and relatively harmless, while other options such as herbs, teas, and dietary supplements have not been subjected to scientific experimentation and have not been proven to be without harm.

Estrogen replacement therapy (ERT) is the often-used medically prescribed treatment for menopausal and postmenopausal women. Although some studies have indicated a decreased risk of CHD and osteoporosis with ERT use, others have indicated it may increase the risk of breast cancer. The Women's Health Initiative, which was designed to study the effects of ERT on the health of elderly women, stopped the ERT part of the research in July 2002. The preliminary result of that study showed the risk of CHD was, in fact, increased in women on ERT.

Phytoestrogens, which are present in foods such as soy, red clover, flaxseed, and other beans and legumes, are natural plant estrogen-type chemicals that can help replace human estrogen without some of the risk factors of ERT. Epidemiological observations indicate that in some cultures where soy is a staple food, women do not suffer from hot flashes during and 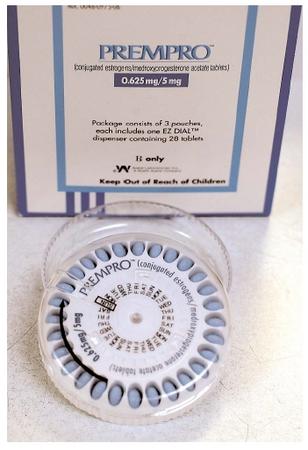 Hormone replacement pills are used by some women to reduce the symptoms of menopause. According to the Women's Health Initiative, women who use a combination of estrogen and the synthetic hormone progestin increase their risk of developing breast cancer and heart disease.
after menopause. The results of human experiments designed to study the effect of soy products on alleviating symptoms during menopause are new and inconsistent, but promising. In addition, the isoflavones in soy products are strong antioxidants and may be effective in reducing the risk of CHD in women of menopausal age.

Herbal supplements promoted by the supplement industry to prevent hot flashes, anxiety, sleep disturbances, and other symptoms of menopause have not been scientifically studied, and since the chemical composition of these supplements is not always known, they may contain harmful substances. Thus, these kinds of supplements are not generally recommended for menopausal women.

Recommendations for dietary and lifestyle changes for women during menopause are a little different from that for women in general. Menopausal women need to eat less of foods that are high in iron. Because they are not menstruating, their requirement for iron is reduced, and is thus the same as for men, about 10 milligrams per day. This means that they need to cut down on red meat, organ meats such as liver and kidney, and other foods high in iron. If they are taking multivitamin and mineral supplements, ones with a low iron content are recommended.

Water intake is emphasized in older women and men, since the thirst sensation becomes dulled as people age. Six to eight glasses of fluid per day are recommended for this age group. Water, fruit juices, other nonalcoholic beverages, and fresh fruits can help provide variety in fluid intake. In addition, an increased consumption of legumes (e.g., dried chick peas, varieties of beans, lentils, soy and soy products) is recommended to provide phytoestrogens and isoflavones. There are other alternatives that are used by people around the world to reduce hot flashes and other symptoms of menopause, including herbs such as ginseng, black cohash, kava, and wild yam. However, there has been little scientific data to determine the effectiveness and safety of these supplements.

Menopausal women need to decrease their intake of total fat, saturated fat, and total calories to balance their energy expenditure and prevent weight gain, which is sometimes associated with this period in a women's life. It is believed that, on average, women gain about 1.2 pounds a year, with most of the weight gain in the form of abdominal fat. A study done in the 1990s found that a modest weight reduction program in premenopausal women, including diet and exercise, produced modest weight loss and favorable blood lipid changes that lasted five years through the women's menopausal period. This study (Simkin-Silverman et al.) proved that weight gain during menopause is not only related to hormonal changes, but also to decreased level of physical activity.

A woman's intake of dietary fiber must be increased during menopause to prevent constipation. This objective can be accomplished by following the Dietary Guidelines for Americans, which recommend consuming six servings of whole grains and cereals, three to five servings of vegetables, and two to four servings of fruit per day. Exercise is also very important for all older individuals. Thirty minutes of moderate daily exercise, such as speed walking, is recommended. Other exercises, such as flexibility and strength training to maintain lean muscle mass and bone density, can be very helpful if done two to three times a week.