Lactose intolerance is the inability to digest significant amounts of lactose, the primary sugar in milk. This inability results from a shortage of the enzyme lactase, which is normally produced by the cells that line the small intestine. Lactase breaks down lactose into simpler forms that can then be absorbed into the bloodstream during the digestive process. Common symptoms of lactose intolerance include nausea, cramps, bloating, gas, and diarrhea.

Structure and Functions of Lactose 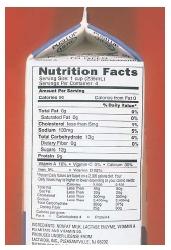 Between 30 and 50 million Americans are lactose intolerant, meaning they are deficient in the enzyme lactase. The majority of lactose-intolerant people can consume small amounts of lactose, or lactose in certain foods, but may experience symptoms of intestinal upset if they consume too much.
intolerant. The condition is least common among persons of northern European descent.

There are three basic types of lactose intolerance: primary, secondary, and congenital. In primary lactose intolerance, the body begins to produce less lactase after about the age of two, depending on an individual's racial or ethnic background. This type is genetically determined and is a permanent condition.

The most common tests used to measure the absorption of lactose in the digestive system are the lactose tolerance test, the hydrogen breath test, and the stool acidity test.

The lactose tolerance test involves an individual drinking a liquid that contains lactose. The individual must fast before this test, in which several blood samples are taken over a two-hour period to measure the blood glucose level, which indicates how well the body is able to digest lactose. If lactose is incompletely absorbed, then the blood glucose level will not rise, confirming a diagnosis of lactose intolerance.

The stool acidity test measures the amount of acid in a person's stool. Undigested lactose fermented by bacteria in the colon creates lactic acid and other short-chain fatty acids that can be detected in a stool sample. In addition, glucose may be present in the sample as a result of unabsorbed lactose in the colon.

Nutrition for People with Lactose Intolerance

There are degrees of intolerance for lactose. Studies have shown that many true lactose intolerants can consume moderate amounts of milk and dairy products without symptoms, particularly if milk is part of a meal.

Milk and other dairy products are a major source of calcium. Many people with lactose intolerance may be able to tolerate yogurt with active cultures, which is very high in calcium, even though it is fairly high in lactose. Evidence shows that the bacterial cultures used in making yogurt produce some of the lactase enzyme required for proper digestion. Lactose-intolerant individuals should also be able to tolerate cheese, as most of the lactose is removed, along with the whey, when the cheese is made.

However, people with lactose intolerance who do not drink milk or eat diary products can still get the calcium they need from dark-green, leafy vegetables such as broccoli, turnip or collard greens, and kale. Certain fish with soft, edible bones, such as herring, salmon, or sardines, are also good calcium sources.

Although milk and foods made from milk are the only natural sources, lactose is often added to processed foods, such as bread, cereal, and salad dressing. This is because dairy products can contribute to the required or desired flavor, color, and texture of many foods, in addition to increasing the nutritional value of processed foods. Some products that are labeled "nondairy," such as powdered coffee creamer and whipped toppings, may include ingredients that are derived from milk, and therefore contain lactose. It is important to carefully read food labels, looking not only for milk and lactose among the contents, but also for such terms as whey, curds, milk by-products, dry milk solids, and nonfat dry milk powder, all of which contain lactose.