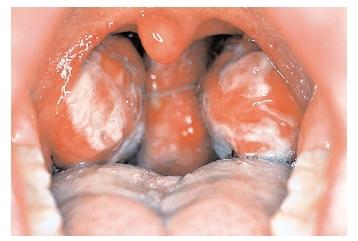 Glandular fever, or mononucleosis, is a viral infection that causes inflamed tonsils (shown here) and fever, and may cause an enlarged spleen. Symptoms most often appear in teens, but more than 80 percent of adults in the United States carry the virus and can transmit it.

Local infections may produce redness, tenderness, and swelling, but systemic infections produce more serious symptoms such as fever, chills, sweats, and fatigue. Many infections will go away on their own, however, as the body's immune system can successfully fight off many infections. Others, however, require treatment, such as the use of antibiotic medications.