Hispanics and Latinos, Diet of

The United States Census Bureau defines Hispanics as those who indicate their origin to be Mexican, Puerto Rican, Cuban, Central or South American (e.g., Dominican, Nicaraguan, Colombian) or other Hispanic origin. This designation is made independently of racial classification. According to the 2002 U.S. Census, 13.3 percent of the U.S. population (or over 37 million Americans) identified themselves as being of Hispanic origin. This number exceeds the number of non-Hispanic blacks, or African Americans, in the United States, making Hispanics the largest minority subpopulation within the nation. The three major subgroups that make up the Hispanic population are Mexican Americans, Puerto Ricans, and Cubans. By far the largest of these is the Mexican-American population, which represents at least twothirds of all Hispanics.

Ethnic and racial diversity within the U.S. increased dramatically during the latter part of the twentieth century, with much of the large-scale immigration coming from Asia and Latin America. From 1980 to 2000 the Hispanic population within the United States doubled. More than 40 percent of Hispanics were living in the western part of the country at the end of the century. In 2000, New Mexico had a higher proportion of Hispanics in its population than any other state, with 42 percent of its population being of Hispanic origin. The high growth rate among Hispanics is attributable to higher fertility rates than those observed in other ethnic groups, and to increases in immigration, especially in border states such as California and Texas. Compared to the non-Hispanic white population, the Hispanic population in the United States is younger, less educated, economically disadvantaged, and more likely to live in larger households. However, there are significant differences among the Hispanic subpopulations, with those of Mexican origin being relatively less advantaged and those of Cuban origin being relatively more advantaged in terms of education and income.

Characteristics of the Hispanic Diet

The contemporary diet of Hispanics in the United States is heavily influenced by the traditional dietary patterns of their countries of origin, as well as by the dietary practices of the adopted communities in which they live. As such, there are many regional differences between Hispanic subgroups, both in terms of the composition of the diet and the means of food preparation. Despite the heterogeneous ancestral backgrounds of Hispanic Americans, many Hispanics still retain core elements of the traditional Hispanic diet, including a reliance on grains and beans and the incorporation of fresh fruits and vegetables in the diet. Family life has traditionally occupied a central place in Hispanic culture, and this has influenced dietary behaviors through home preparation of meals and the practice of families eating together.

Analysis of the macronutrient content of the diet reveals that Hispanics, especially Mexican Americans, have a lower intake of total fat and a higher intake of dietary fiber compared to non-Hispanic white populations, with much of the dietary fiber coming from legumes. In general, Mexican Americans and other Hispanic subgroups are low in many of the same micronutrients as the general population, with intakes of vitamin E, calcium, and zinc falling below Recommended Daily Allowances.

Acculturation and the Hispanic Diet

Just as Hispanics have altered American cuisine, American culture has also altered the diet of Hispanic Americans. As with many other immigrant groups in the United States, the lifestyle of Hispanic Americans is undergoing a transition away from one based on the traditional values and customs of their ancestry, as they begin to adopt the values and behaviors of their adopted country. With regard to health behaviors, this process of acculturation is typically characterized by a more sedentary lifestyle and a change in dietary patterns. The effects of acculturation on the Hispanic diet are illustrated in national dietary survey data that show that Hispanic Americans who continue to use Spanish as a primary language eat somewhat more healthful diets than those who use English as a primary language. These healthier eating behaviors include lower consumption of fat, saturated fat, and cholesterol. Additional analysis of these survey data reveals that these dietary differences do not appear to be the result of greater nutritional knowledge or greater awareness of food-disease relationships.

The degradation of diet quality that occurs as Hispanic Americans become acculturated into the mainstream U.S. population occurs in the context of improvements in, rather than degradation of, economic status. For example, first-generation Mexican-American women, despite being of lower 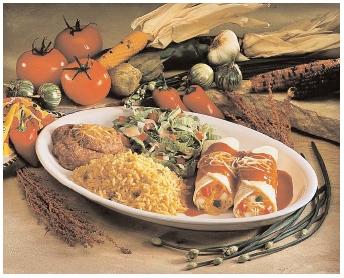 The process of acculturation and the changing nature of the Hispanic diet has serious implications for the state of Hispanic health. The prevalence of type 2 diabetes mellitus is two to three times higher in Hispanic Americans than in non-Hispanic whites, with an estimated 10 percent of adults over the age of twenty and 25 to 30 percent of those over the age of fifty affected. The prevalence of the disease is especially high among Mexican Americans. Diabetes, a disease characterized by high levels of glucose in the blood, is a major cause of death and disability in the United States. Compared to nondiabetic individuals, those with the disease are also at two to four times higher risk of developing cardiovascular disease, the leading cause of death in the country. Accompanying this increased risk of diabetes among Hispanics is a marked increase in the risk of obesity.

Much of the increased risk of diabetes experienced by Hispanic Americans is believed to be attributable to the changing lifestyle that accompanies the acculturation process, including the changing quality of the Hispanic diet and the adoption of a more sedentary lifestyle. These trends are occurring across all segments of the Hispanic population, although the extent of the changes are more pronounced in some subgroups (e.g., Mexican Americans in large urban areas) than in others. Although Hispanic Americans generally smoke less than their non-Hispanic white counterparts, the direction of Hispanic health is also threatened by an increasing frequency of cigarette smoking, particularly among younger segments of the population. 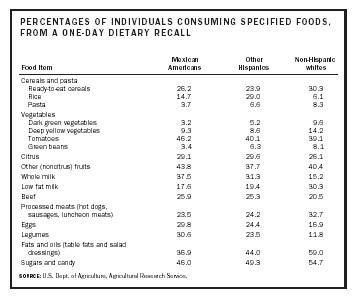 Approaches for improving the health of Hispanics need to be broad-based and to consider the complexities of a variety of lifestyle factors. Nutrition education programs aimed at improving the quality of the Hispanic diet are currently based on a combination of preserving some elements of the traditional Hispanic diet—including a reliance on beans, rice, and tortillas—and a change in others—such as reduced consumption of high-fat dairy products and less use of fat in cooking.