Nutrition plays a vital role in the prevention of chronic diseases such as coronary heart disease, hypertension, and diabetes. The Healthy Eating Index (HEI) is a measure of the overall quality of an individual's diet. It was developed by the U.S. Department of Agriculture (USDA) to assess how well American diets comply with the 2000 Dietary Guidelines for Americans and the Food Guide Pyramid.

Components 1–5 assess how well an individual's diet complies with the Food Guide Pyramid serving recommendations for the Grain, Vegetable, Fruit, Milk, and Meat Groups. Recommended servings for each food group are calculated based on diets containing 1,600, 2,200, and 2,800 calories per day. Components 1–5 have a maximum of 50 points, with 10 coming from each food group. A score of zero is assigned to a group if no items from that category are consumed. Intermediate scores are calculated proportionately to the number of servings consumed. 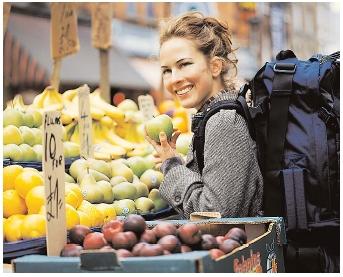 By applying the Healthy Eating Index (HEI) to data gathered by various consumer surveys, the USDA is able to assess the quality of Americans' diets. Recent HEI results suggest that Americans need to eat more fruit.
to total calories is 45 percent or higher. Intakes between 30 percent and 45 percent are scored proportionately.

The USDA periodically applies the HEI to data from the national food consumption surveys. The most recent HEI uses data from the National Health and Nutrition Examination Survey (NHANES). Previous data were based on the Continuing Survey of Food Intakes by Individuals (CSFII). Current data are based on 24-hour dietary recalls of representative samples. The HEI is computed for Americans two years of age and older. The findings indicated that:

The HEI is a practical tool for assessing dietary quality, and results from the index can provide insights on how to improve eating patterns. Different strategies need to be developed to reach different segments of the population. The USDA Center for Nutrition and Public Policy has developed an interactive, self-assessment version of the Healthy Eating Index, which can be found on its Web site.