The most common type of U.S. fast-food restaurant specializes in a meal consisting of a hamburger, French fries, and a beverage. Examples include McDonald's, Burger King, and Wendy's. Some, such as Kentucky Fried Chicken, specialize in chicken; some, such as Subway, provide sandwiches; and others, such as Taco Bell, provide Americanized ethnic foods. Outside of the United States, these fast-food eateries serve some of the standard American dishes, such as hamburgers, but they may also serve regionally popular items. There are also fast-food restaurants in other countries that specialize in providing ethnic foods, such as soups in Japan or crepes in France.

Many fast foods are fried (which facilitates quick preparation), high in fat and sodium, and low in fiber, vitamins, and some minerals. The "added value" option, whereby customers can order larger sizes for a minimal additional charge, adds to the total calorie and fat intake. Many of these eateries now offer salads, low-calorie or fat-free dressings, low-fat ice cream, and plain, broiled chicken sandwiches or other foods low in fat and/or calories. Menu options will probably continue to increase in response to health concerns and changing demographics. 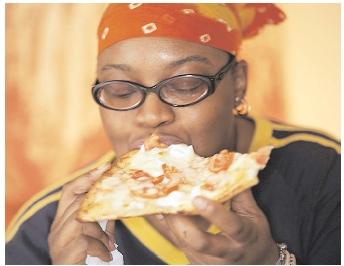 Extra-large portions of fast food may seem like a bargain, but such items add excessive empty calories to the diet. A "supersized combo meal" may provide a person's entire daily recommended intake of calories, but will probably include very few essential nutrients.