Prior to the development of exchange lists in 1950, meal planning for persons in the United States with diabetes was chaotic, with no agreement among the major organizations involved with diabetes and nutrition. To solve this problem, the concept of "exchange," or "substitution," of similar foods was developed by the American Dietetic Association, the American Diabetes Association, and the U.S. Public Health Service. The goal was to develop an educational tool for persons with diabetes that would provide uniformity in meal planning and allow for the inclusion of a wider variety of foods.

The word exchange refers to the fact that each item on a particular list in the portion listed may be interchanged with any other food item on the same list. An exchange can be explained as a substitution, choice, or serving. Each list is a group of measured or weighed foods of approximately the same nutritional value. Within each food list, one exchange is approximately equal to another in calories, carbohydrate, protein, and fat. To use the exchange lists, an individual needs an individualized meal plan that outlines the number of exchanges from each list for each meal and for snacks. The American Diabetes Association recommends that because of the complexity of nutrition issues, a registered dietitian, knowledgeable and skilled in implementing nutrition therapy into diabetes management and education, be the team member developing and implementing meal plans. The meal plan is developed in cooperation with the person with diabetes and is based on an assessment of eating changes that would assist the individual in achieving his or her target metabolic goals and of changes the individual is willing and able to make. Because of the accuracy and convenience of the exchange system, the exchange lists are used for weight management as well for diabetes management.

The exchange system categorizes foods into three main groups: Carbohydrates, Meat and Meat Substitutes, and Fats. Foods are further subdivided in these three groups into specific exchange lists. The Carbohydrate Group contains the Starch, Fruit, Milk, Sweets and desserts (other carbohydrates), and Vegetable lists. Foods from the Starch, Fruit, Milk, and Sweets lists can be interchanged in the meal plan, as they each contain foods with 60 to 90 calories and approximately 15 grams of carbohydrate. The Meat and Meat Substitute Group contains food sources of protein and fat. The group is divided into four lists: Very Lean Meats, Lean Meats, Medium-Fat Meats, and High-Fat Meats, allowing the user to see at a glance which meats are low-fat and which meats are high-fat. The lists have foods containing 35, 55, 75, and 100 calories, and 1, 3, 5, and 8 grams of fat, respectively. The Fat Group contains three lists: Monounsaturated Fats, Polyunsaturated Fats, and Saturated Fats. Each food source contains an average of 45 calories and 5 grams of fat. The exchange lists also identify foods that contribute significant amounts of sodium. A sodium symbol is shown next to foods that contain 400 mg or more of sodium per exchange serving.

An advantage of the food exchange system is that it provides a system in which a wide selection of foods can be included, thereby offering variety and versatility to the person with diabetes. Other advantages of the lists are: (1) they provide a framework to group foods with similar carbohydrate, protein, fat, and calorie contents; (2) they emphasize important management concepts, such as carbohydrate amounts, fat modification, calorie control, and awareness of high-sodium foods; (3) by making food choices from each of the different lists a variety of healthful food choices can be assured; and (4) they provide a system that allows individuals to be accountable for what they eat. Furthermore, with an understanding of the nutrient composition of the exchange lists, nutrient values from food labels can be used and a wider variety of foods can be incorporated accurately into a meal plan.

Despite the many advantages the exchange lists offer, they may not be the most appropriate meal-planning tool for many persons. For instance, they are not appropriate for those who cannot understand the concept of "exchanging" foods. Because the exchange booklets are written at a ninth- to tenth-grade reading level, individuals must be able to either read at this level or understand the concept of exchanging foods. For an individual to use them effectively, several educational sessions, and practice, may be required.

In 1950, the following problems that had led to inconsistencies in food recommendations for persons with diabetes were identified: (1) methods used to estimate the composition of a diet were prolonged and needlessly precise; (2) there were many inconsistencies in the inclusion or restriction of foods; and (3) sizes of recommended portions were often stated in impractical amounts that were difficult to measure. Recognizing these facts, the food values given in table 1 were established. By combining foods of similar composition into food exchange lists, long and extensive lists of foods could be greatly abbreviated.

The first major revision of the exchange lists was published in 1976. The goals at that time were: to be more accurate in the caloric content of listed foods, to emphasize fat modification, and to provide for individualized meal plans to be used with the exchange lists.

The next revision of the exchange lists occurred in 1986. The goals of this revision were to ensure the exchange lists would reflect the principles of nutrition and to develop a database of the nutrient composition of the foods listed. Using the data from the database, revisions in the nutrient values assigned to some exchanges were made. For example, the Fruit list was changed from 10 grams of carbohydrate to 15 grams, with a subsequent increase in calories from 40 to 60 per exchange serving, to reflect the content of typical fruit portions.

The goals of the 1995 revision were: (1) to group carbohydrate food sources into one section to provide more flexibility in food choices; (2) to update the lists of foods and the database, primarily to add fat-modified foods, vegetarian food items, and fast foods; and (3) to allow for more accurate calculation of exchanges from nutrient information on labels, recipes, and prepared foods. The most significant revision in the 1995 revision was in the order and grouping of the lists. The Carbohydrate Group was listed 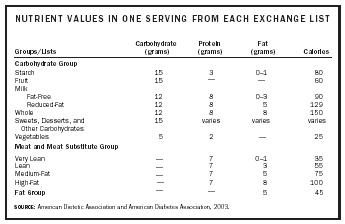 NUTRIENT VALUES IN ONE SERVING FROM EACH EXCHANGE LIST

The American Diabetes Association and the American Dietetic Association published the latest version of the Exchange Lists for Meal Planning in January 2003. Food lists were updated and the Other Carbohydrate list was renamed the Sweets, Desserts, and Other Carbohydrates list. Each list begins with generalized servings of exchange. The nutrient values from the 1995 and 2003 exchange lists are the same and are listed in table 2. Also included in the booklet are a listing of free foods (foods containing less than 20 calories and 5 grams of carbohydrate); combination foods (entrees, frozen entrees, soups), and fast foods.