The term eating habits (or food habits) refers to why and how people eat, which foods they eat, and with whom they eat, as well as the ways people obtain, store, use, and discard food. Individual, social, cultural, religious, economic, environmental, and political factors all influence people's eating habits.

Why and How People Eat

All humans eat to survive. They also eat to express appreciation, for a sense of belonging, as part of family customs, and for self-realization. For example, someone who is not hungry may eat a piece of cake that has been baked in his or her honor.

People eat according to learned behaviors regarding etiquette, meal and snack patterns, acceptable foods, food combinations, and portion sizes. Etiquette refers to acceptable behaviors. For example, for some groups it is acceptable to lick one's fingers while eating, while for other groups this is rude behavior. Etiquette and eating rituals also vary depending on whether the meal is formal, informal, or special (such as a meal on a birthday or religious holiday).

A meal is usually defined as the consumption of two or more foods in a structured setting at a set time. Snacks consist of a small amount of food or beverage eaten between meals. A common eating pattern is three meals (breakfast, lunch, and dinner) per day, with snacks between meals. The components of a meal vary across cultures, but generally include grains, such as rice or noodles; meat or a meat substitute, such as fish, beans, or tofu; and accompaniments, such as vegetables. Various food guides provide suggestions on foods to eat, portion sizes, and daily intake. However, personal preferences, habits, family customs, and social setting largely determine what a person consumes. 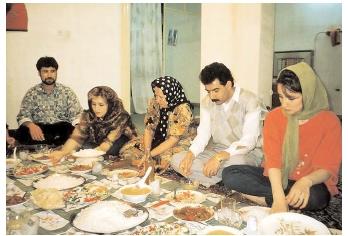 What and how people eat is determined by a variety of factors, including economic circumstances, cultural norms, and religious restrictions. Here, an Iranian family sits on the floor and eats from a cloth laden with regional delicacies.

In each culture there are both acceptable and unacceptable foods, though this is not determined by whether or not something is edible. For example, alligators exist in many parts of the world, but they are unacceptable as food by many persons. Likewise, horses, turtles, and dogs are eaten (and even considered a delicacy) in some cultures, though they are unacceptable food sources in other cultures. There are also rules concerning with whom it is appropriate to eat. For example, doctors in a health facility may eat in areas separate from patients or clients.

Humans acquire, store, and discard food using a variety of methods. People may grow, fish, or hunt some of their food, or they may purchase most of it from supermarkets or specialty stores. If there is limited access to energy sources, people may store small amounts of foods and get most of what they eat on a day-to-day basis. In homes with abundant space and energy, however, people purchase food in bulk and store it in freezers, refrigerators, and pantries. In either case there must also be proper disposal facilities to avoid environmental and health problems.

There are innumerable flavors and food combinations. A liking for some flavors or food combinations is easily acceptable, but others must develop or be learned. Sweetness is a universally acceptable flavor, but a taste for salty, savory, spicy, tart, bitter, and hot flavors must be learned. The more a person is exposed to a food—and encouraged to eat it—the greater the chances that the food will be accepted. As the exposure to a food increases, the person becomes more familiar and less fearful of the food, and acceptance may develop. Some persons only eat specific foods and flavor combinations, while others like trying different foods and flavors.

There are many factors that determine what foods a person eats. In addition to personal preferences, there are cultural, social, religious, economic, environmental, and even political factors.

Every individual has unique likes and dislikes concerning foods. These preferences develop over time, and are influenced by personal experiences such as encouragement to eat, exposure to a food, family customs and rituals, advertising, and personal values. For example, one person may not like frankfurters, despite the fact that they are a family favorite.

A cultural group provides guidelines regarding acceptable foods, food combinations, eating patterns, and eating behaviors. Compliance with these guidelines creates a sense of identity and belonging for the individual. Within large cultural groups, subgroups exist that may practice variations of the group's eating behaviors, though they are still considered part of the larger group. For example, a hamburger, French fries, and a soda are considered a typical American meal. Vegetarians in the United 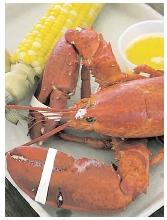 Someone who is repeatedly exposed to certain foods is less hesitant to eat them. For example, lobster traditionally was only available on the coasts, and is much more likely to be accepted as food by coastal dwellers.
States, however, eat "veggie-burgers" made from mashed beans, pureed vegetables, or soy, and people on diets may eat a burger made from lean turkey. In the United States these are appropriate cultural substitutions, but a burger made from horsemeat would be unacceptable.

Religious proscriptions range from a few to many, from relaxed to highly restrictive. This will affect a follower's food choices and behaviors. For example, in some religions specific foods are prohibited, such as pork among Jewish and Muslim adherents. Within Christianity, the Seventh-day Adventists discourage "stimulating" beverages such as alcohol, which is not forbidden among Catholics.

Money, values, and consumer skills all affect what a person purchases. The price of a food, however, is not an indicator of its nutritional value. Cost is a complex combination of a food's availability, status, and demand.

The influence of the environment on food habits derives from a composite of ecological and social factors. Foods that are commonly and easily grown within a specific region frequently become a part of the local cuisine. However, modern technology, agricultural practices, and transportation methods have increased the year-round availability of many foods, and many foods that were previously available only at certain seasons or in specific areas are now available almost anywhere, at any time.

Political factors also influence food availability and trends. Food laws and trade agreements affect what is available within and across countries, and also affect food prices. Food labeling laws determine what consumers know about the food they purchase.