Americans have become more aware of what they eat, and how it might affect their health. Concerns about the safety of the food supply are on the rise, and increasing nutritional awareness has led to an increase in vegetarian, organic, and health-food options in supermarkets. "Lite" food is in, and indulgence is out. But are Americans practicing what they preach? A closer look at American dietary trends reveals that parts of the American diet are still lacking in nutritional quality, despite consumer demand for healthier options.

Fruit and vegetable intake, although rising, is still below the five servings per day recommended in the USDA's Dietary Guidelines for Americans. The average American eats one and one-half servings of vegetables and one serving of fruit per day. Since the beginning of the twentieth century, consumption of milk and eggs has been declining, while cheese consumption has gone up. Meat, poultry, and fish intake has climbed dramatically. Grain and cereal consumption has also risen. Vegetable fats are increasingly being used instead of animal fats, but total fat consumption is still high.

Sixty percent of Americans eat snack food regularly, consuming about 20 percent of their calories from snacks. Because half of young adults skip breakfast, and one-fourth skip lunch, between-meal eating contributes significantly to the daily nutrient intakes of Americans. Children, in particular, require several small meals per day, as their stomachs cannot hold large amounts of food at one time. Carefully chosen snacks can add to good dietary habits. Most Americans, however, do not snack wisely.

More than 30 percent of men and more than 40 percent of women take a daily multivitamin/mineral supplement. Doses of about 100 percent of the Daily Value (DV) of most nutrients are common in these supplements. Although nutrition experts agree that the average American does not need supplements, there is little harm in taking them. Problems can arise, however, when individual nutrients are taken. Megadoses of certain minerals and relatively low supplemental doses of certain fat-soluble vitamins can lead to toxicity. For example, a surplus of vitamin A can lead to cheilitis (cracking and inflammation of the lips), dryness of the nasal mucosa and eyes, hair loss, and, eventually, liver damage. Megadoses of vitamin D can lead to the calcification of soft tissues, such as the lungs, heart, and kidneys. 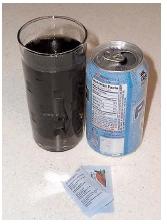 An average American consumes more than fifty pounds of artificial sweeteners per year, which is a 300 percent increase since 1965. Much of the increase is due to the popularity of diet soft drinks.

Since 1965, artificial sweetener use has increased threefold. At the same time, there has been a 14 percent increase in sugar use. It seems Americans are using sugar substitutes in addition to, rather than in place of, sugar. The current consumption of all types of sweeteners is 150 pounds per capita, 99 pounds of which is sugar. According to the USDA Food Guide Pyramid, sugar and sweets should be consumed sparingly. America's preference for sweets only adds to the growing problem of an overweight population.

Most sweeteners are consumed in soft drinks. According to the United States Department of Agriculture (USDA) 1998 Continued Survey of Food Intakes by Individuals (CSFII), soft-drink intake has surpassed both men's and women's milk intake (since the 1989–1991 survey). Given that milk is the primary dietary calcium source, this trend has contributed to low calcium levels. Total soft-drink use has increased by 300 percent since the 1950s. In 1974 alone, nearly 4.5 billion cases of soft drinks were sold. It has since become nearly impossible to estimate the annual soft-drink consumption of the United States.

The introduction of the Swanson TV dinner in 1953 started the trend for convenience foods. In addition, fewer meals are prepared at home as more women have joined the workforce. About 25 percent of calories eaten by adult men and women are eaten away from home (according to the 1998 CSFII, which covered the years 1994–1996). "Home-cooked" meals now often come prewashed, precooked, prebaked, preprocessed, and presliced. Toaster ovens, microwaves, and other home appliances have further reduced preparation times.

Scientists have begun to trace the link between portion sizes and increased obesity in the United States. According to the Centers for Disease Control and Prevention, between 1971 and 2000 American women increased the number of calories they consumed by 22 percent (from 1,542 to 1,877 per day), while men increased their intake by 7 percent (from 2,450 to 2,618 calories). Government recommendations, by contrast, are a mere 1,600 calories a day for women and 2,200 a day for men. Many of the additional calories consumed have come from carbohydrates, which has led some scientists to theorize that an increased emphasis on reducing saturated fat in diets led people to believe they could consume all the carbohydrates they wanted. Moreover, many more meals are now consumed outside the home, and serving sizes at national restaurant chains have become two to five times larger than they were in the 1970s. Cookbook publishers have followed suit by increasing portion sizes in recipes. During the thirty-year period covered by the study, obesity rates doubled, and two-thirds of Americans are now considered overweight.

The completion of the national highway system in the 1950s triggered the rise of McDonald's and other road-side hamburger chains across the nation. Many meals eaten away from home now come from fast-food eateries. In 1978, fast-food sales totaled $9 billion—a figure that rose to $106 billion in 1998. Fast-food restaurants have beaten sit-in restaurants in sales since 1994. In addition, serving sizes have continued to increase dramatically, and fast-food diets are low in calcium, riboflavin, vitamin A, folic acid, and vitamin C, as well as being high in fat and saturated fat.

Many adult women fail to meet the Recommended Dietary Allowances (RDAs) for calcium, vitamin E, vitamin B6, magnesium, and zinc. Adult men fall short on vitamin E, magnesium, and zinc. Men consume about 4,000 milligrams of sodium each day, while women consume about 3,000. Both exceed the recommended level of no more than 2,400 milligrams of sodium per day.

All age groups above age two exceed the recommended intake of fat (no more than 30 percent of calories) and saturated fat (no more than 10 percent of calories). Cholesterol consumption is within the recommendation of no more than 300 milligrams per day. Iron intake is often low, especially in adolescents and adult women, and iron-deficiency anemia is higher in these groups than in any other. Low calcium intake is of particular concern in adolescent girls and pregnant women.

The main shortcoming of the American diet is the surplus of energy (calories). Over one third of adult Americans are obese (and many more are overweight), and a growing number of children are overweight. The reason for this increasing trend is two-fold: energy consumption is up, and activity levels are down.

The Third National Health and Nutrition Examination Survey (NHANES III), carried out between 1988 and 1994, showed an increase of between 100 and 300 calories in daily energy intake since NHANES II (1976 to 1980). In addition, a 1993 survey of 87,000 adults undertaken by the Center for Disease Control and Prevention (CDC) showed that 58.1 percent of Americans engaged in little or no physical activity. This lack of exercise, coupled with increased food intake, contributes to many chronic diseases, such as cardiovascular disease, certain types of cancer, and diabetes.

Although awareness about proper diet has increased, most Americans do not follow the recommended guidelines for healthful eating. Fast-food and convenience-food consumption, snacking, supplementation, and soft-drink use have all increased. Many Americans do not meet the RDAs for key nutrients, yet they exceed their caloric requirements, leading to an increasingly overweight population. Future trends will likely include a higher demand for safer, quicker, and more convenient fast foods that also provide the health benefits Americans need.

Food Surveys Research Group. "What We Eat in America." Available from <http://www.barc.usda.gov/bhnrc/foodsurvey>