Diarrhea, a condition that has a major impact on global health, is highly correlated with nutritional status. It is an important area of focus due not only to its high worldwide prevalence and health costs, but also because it can be significantly reduced by appropriate interventions and treatment.

Diarrhea has various causes and symptoms, resulting in a wide range of definitions for this illness. The U.S. National Institutes of Health (NIH) defines diarrhea as loose, watery stools occurring more than three times a day, which is the most common definition. The term acute diarrhea is used to describe an episode lasting less than three weeks. Persistent diarrhea is an episode that lasts more than fourteen days, and chronic diarrhea is the term for recurring episodes of diarrhea. Dysentery is diarrhea that contains blood. The severity of diarrhea ranges from asymptomatic to severe dehydration resulting in death.

Diarrhea can present in many ways because it has many potential causes. Most cases of diarrhea are caused by some type of infection. For example, surveillance studies in rural Bangladesh have cited infection as the cause of 86 percent of the cases of diarrhea in that population. This is the case in much of the developing world. Regardless of the cause, diarrhea results from an alteration of the lining of the wall of the intestines. Normal digestion occurs when there is a balance of fluid and nutrients across the bowel wall. Disruption of this process can be caused directly by organisms, toxins, or immune reactions. Any imbalance alters the composition of the stool and the motility (motion) of the bowel wall, resulting in an increased loss of fluid and nutrients. Dehydration is the result of loss of body fluids and electrolytes. A loss of 5 percent of body weight can result in a rapid heart rate, dizziness, decreased urination, disorientation, and even coma. A 10 percent loss of body weight caused by severe diarrhea can lead to acidosis, shock, and death.

People in developing countries suffer most from infectious forms of diarrhea. Most infections pass through a fecal-oral route. This results from environmental causes such as poor sanitation, decreased access to clean water, and a poor understanding of transmission and treatment of disease. These are conditions that arise most frequently in the developing world, though they affect both rural and urban populations. Improvements in these areas result in a dramatic reduction of cases of infectious diarrhea, as shown in studies in numerous developing nations, such as India, Gambia, and elsewhere, where poor socioeconomic status affects a large percentage of the population. Traveler's diarrhea is the result of exposure to such infectious agents when visiting countries where sanitation is inadequate.

Diarrhea is a major cause of death in much of the world, particularly in developing nations, where the effect is greatest among the young. The World Health Organization (WHO) attributes 3.5 million deaths a year to diarrhea, with 80 percent of these deaths occurring in children under the age of five, and most occurring in children between six months and three years of age. Children are the most susceptible because a smaller amount of fluid 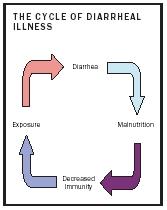 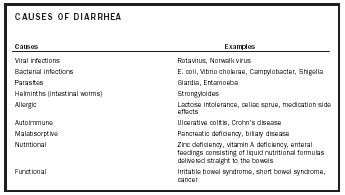 loss is necessary to result in significant dehydration, because they have fewer internal resources, and because their energy requirements are higher.

Children in developing nations suffer from an average of four cases of diarrhea a year. Most of these cases are infectious diarrhea. Infectious diarrhea also contributes to malnutrition due to a decreased nutritional intake and diminished absorption of vital nutrients during the acute episode and recovery period. Malnutrition, in turn, decreases the ability of the immune system to fight further infections, making diarrheal episodes more frequent.

Studies have shown that poor nutritional status can double the risk of contracting diarrhea when exposed to an infectious agent. In addition, the duration of the acute episode can be up to three times as long in malnourished children. In addition, reduced immunity and deficiencies of nutrients such as vitamin A and zinc, which are common in malnourished individuals, can increase the health risks from diarrhea. Diarrhea also causes decreased appetite and food intake, decreased absorption of nutrients from the food that is ingested, and increased catabolism of body proteins. The resulting undernutrition stunts future mental and physical development.

Eating patterns before and after diarrheal episodes play an important role in this cycle. In developing countries, environmental factors, such as pervasive bacterial contamination of water used for drinking, cooking, and cleaning, contribute to continued exposure to agents that cause diarrhea. Maternal practices related to feeding are also a factor. Reduced breastfeeding rates in developing nations mean that fewer children receive the protective and nutritional benefits of breast milk. Nursing allows for the delivery of milk high in fats, proteins, and calories in a sterile fashion. When illness causes mothers to wean their children too early, nutritious breast milk is replaced with cereals and gruels that are often low in calories and proteins and are made with contaminated water. Commercial formulas are also often diluted with contaminated water and put in bottles that are not sterile.

A lack of maternal education often leads to the common practice of withholding food during acute episodes of diarrhea out of fear that eating will exacerbate the symptoms. Because of the nutritional losses from diarrhea, children actually need up to a 30 percent increase in calories and a 100 percent increase in protein intake during the acute and recovery stages of diarrhea. Studies have shown that children who receive increased nourishment during this time suffer less from the acute and long-term effects of diarrhea. The WHO recommends the continuation of breastfeeding throughout an acute episode, as well as the use of mixed food cereals high in calories and protein. There is also evidence to support zinc supplementation, which can reduce the morbidity rates from diarrhea.

The mainstay of treatment for diarrhea is rehydration to replace the fluid and electrolyte losses. This is the cornerstone of oral rehydration therapy (ORT), which has greatly reduced the morbidity and mortality from diarrheal illnesses throughout the world. Rehydration must be combined with the fulfillment of increased nutritional demands. Antibiotics have a very limited role in effectively reducing morbidity and mortality from diarrhea, and antimotility and absorbent agents have virtually no role.

It is evident that the morbidity and mortality from diarrhea results from a complex interplay of environmental hazards, risk factors, and treatment response. Interventions to reduce the global impact of diarrhea must therefore be multifactorial in their approach. This is an illness that imposes a large health burden on society, but has avenues for effective intervention.