Maize, the American Indian word for corn, literally means "that which sustains life." After wheat and rice, it is the most important cereal grain in the world, providing nutrients for humans and animals. It also serves as a basic raw material for the production of starch, oil, protein, alcoholic beverages, food sweeteners, and fuel. Maize has the highest average yield per hectare.

Maize is an important food in Asia, Africa, Latin America, and parts of the former Soviet Union. Each country has one or more maize dishes that are unique to its culture. Examples are ogi (Nigeria), kenkey (Ghana), koga (Cameroon), tô (Mali), injera (Ethiopia), and ugali (Kenya). Most of these products are processed in traditional ways. In Africa, ground maize is cooked into a paste or mush and eaten while still warm, accompanied by a thick low-alcoholic beer. In some areas of Africa, maize mush is fried or baked. In Central and Latin American, maize is consumed in the form of maize bread or tortillas.

Maize is also used as animal feed and raw material for industrial use. In industrialized countries, a larger proportion of the grain is used as livestock feed and as industrial raw material for food and nonfood uses. On the other hand, the bulk of maize produced in developing countries is used as human food, although its use as animal feed is increasing. Maize is the largest food crop of the United States, which is responsible for 40 percent of the world's production. 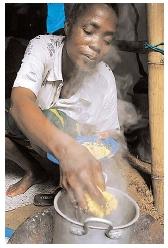 Many Africans depend on some variation of this mush, which is made with water and ground maize. It can be eaten as a porridge or a dumpling, depending on the thickness of the batter and the cooking method.

Six general varieties of maize or corn are differentiated by the characteristics of the kernel. Dent corn is the leading type of corn grown on U.S. farms. The sides of the kernel consist of hard, so-called horny starch, and the crown contains soft starch. As the grain matures, this soft starch shrinks, forming the characteristic dent. In flint corn, the horny starch extends over the top of the kernel, so there is no denting. Popcorn, a light, highly popular snack throughout the United States, is a variant of flint corn with small kernels of great hardness. When heated, the moisture in the kernels expands, causing the kernels to pop open. Flour corn contains a preponderance of soft or less densely packed starch, and it is readily ground into meal. Sweet corn is the type commonly grown in the United States for human consumption. The sugar produced by the sweet-corn plant is not converted to starch during growth, as it is in other types. Pod corn is seldom used as food but is often grown as a decorative plant—each kernel is enclosed in its own set of diminutive husks. Another decorative corn, commonly called Indian corn, consists of multicolored varieties of flour and flint types.

The nutritional quality of maize is determined by the amino acid makeup of its protein. Maize is deficient in two essential amino acids: lysine and tryptophan, making it a poor protein food. The kernel is made up of the endosperm, the germ, the pericap, and the tip cap. The protein concentration is highest in the germ, but the quality is better in the endosperm. The germ proteins contribute significantly to essential amino acids, so maize food products without the germ, including quality protein maize (QPM) endosperm, are lower in protein quality compared to the whole kernel.

The germ contributes most of the oil, sugar, vitamins, and minerals of the kernel. The germ also has a lower leucine to isoleucine ratio, giving it a higher biological value. Biological value is defined as the amount of absorbed nitrogen needed to provide the necessary amino acids for the different metabolic functions in the body.

The high consumption of maize by the human population and the well-established lysine and tryptophan deficiencies in maize protein motivated researchers to develop the QPM to increase concentrations of these essential amino acids in its protein. Newer varieties provide higher protein content (18%) by increasing the prolamine (zein) fraction in maize endosperm. An example of QPM is one opaque-2 maize.

QPM varieties have almost double the percentages of lysine and tryptophan compared to normal maize, but are similar in overall protein content. However, the QPM varieties have a greatly reduced amount of the major storage protein, zein. The biological value of common maize is 45 percent whereas the QPM is about 80 percent. Hence the production and consumption of QPM maize in countries that use maize as their chief grain crop would have a beneficial effect on the nutritional state of the people and significant economic implications from the better use of what is produced and consumed.

Compared to normal maize, production of QPM varieties may have some disadvantages. QPM varieties have softer, floury endosperms, providing a slightly lower yield and making the plant more susceptible to storage insects. Furthermore, QPM varieties have lower zein content, which is associated with lysine deficiency and a higher imbalance of essential amino acids. Hence they are considered to be of a lower quality. They are also susceptible to weevils in storage.

The nutritional disease pellagra, which is caused by a deficiency in niacin, is associated with maize-based diets in the Americas and Africa. While niacin is readily available in corn, it exists in a bound form (niacytin) that is not biologically available to monogastric (single-stomach) animals. Furthermore, 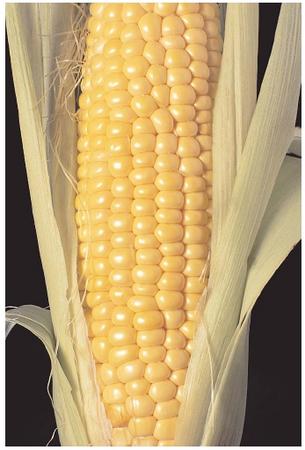 In the early twentieth century, hundreds of thousands of people in the southern United States suffered from pellagra, a serious disease that affects people whose diet does not include enough niacin. Pellagra occurs in cultures that depend on corn as a dietary staple, because the niacin in corn is difficult to digest and is often removed during processing.
most of the niacin in the kernel (63%) occurs in the outermost layer of the endosperm. This layer is often removed with the pericarp during dehulling. In Mexico, Guatemala, and other countries, maize is treated with an alkaline solution of lime, which releases the niacin and helps prevent pellagra. Furthermore, pellagra seldom occurs among people in Latin America, since they eat tortillas—tortilla preparation greatly increases the bioavailability of the niacin in maize.

Persons suffering from pellagra usually appear to be poorly nourished, and they are often weak and underweight. They also exhibit dermatitis, diarrhea, and dementia. If untreated, pellagra can result in death. Niacin supplements are available to aid in the treatment of the disease. There are also several methods of increasing niacin content in maize-based diets, including:

Maize is a good source of vitamin B and B12. Yellow maize can provide substantial amounts of vitamin A, and the maize germ is rich in vitamin E. Furthermore, maize oil contains a high level of polyunsaturated fatty acids and natural antioxidants (Okoruwa, 1996). However, of the three major cereal grains (wheat, maize, and rice), maize has the lowest concentration of protein, calcium, and niacin.

Dietary preferences, processing, and mode of preparation affect the contributions of maize in human nutrition. For example, the nutritive value of the grain may increase or decrease depending upon the method in which it is processed (the milling of maize reduces the concentration of protein, lipids, and fiber). Diets that rely heavily on corn may require the consumption of complementary foods to supplement its deficiency in certain amino acids and vitamins.

Food and Agriculture Organization of the United Nations. Maize in Human Nutrition. Available from <http://www.fao.org/docrep>