Central Europeans and Russians, Diets of

A health gap separates Central and Eastern Europe from the United States, Canada, Japan, and the Western part of Europe. This East-West gap in health started during the 1960s. Almost half of this gap was due to cardiovascular disease (CVD) mortality differentials. There has been a marked increase of CVD in Central and Eastern Europe, which is only partially explainable by the high prevalence of the three traditional CVD risk factors (hypercholesterolemia, hypertension, and smoking) in these countries. There is an extreme nonhomogeneity of the former Soviet bloc, and the data from each country must be analyzed individually. The aim here is to present the latest available data, which show the health status of various regions of postcommunist Europe. All data used are taken from the World Health Organization (WHO) Health for All Database (as updated in June 2003). The last available data from most countries are from the year 2002.

The most significant changes in CVD mortality have been observed in the region of the former Soviet Union (USSR). Between the years 1980 and 1990, male premature mortality was relatively stable in all regions of the USSR, and two to three times higher than in EU nations, or average. After the collapse of the USSR, CVD mortality began to rise dramatically in all the new independent states within the territory of the former USSR. In 1994 the male CVD mortality in Russia and Latvia was more than five times higher than the EU average. Women in these countries have been affected to almost the same degree as men, and the CVD mortality trends were strongest among young adults and middle-aged individuals. Cancer mortality was stable during this period, however. In 1994 the life expectancy of Russian men was almost twenty years less than that of men in Japan and some European countries. After 1994, however, there was a sudden drop in mortality both in males and females, followed by a further increase.

Communist period (1970–1989). The socioeconomic situation in the democratic part of Europe and in the United States after World War II was substantially different than that in the Soviet bloc. The United States and the European democratic states were prosperous countries with effective economies and a rich variety of all kinds of foods. The communist states, however, had ineffective centralized economies and lower standards of living. The amount of various foods, especially foods of animal origin, was almost always insufficient in the USSR and the majority of its satellite countries. Data on food consumption compiled by the Food and Agricultural Organization (FAO) confirm that meat consumption was, between 1961 and 1990, substantially lower in the USSR, Poland, Romania, and Bulgaria than in Western Europe or the United States. Similarly, the consumption of milk and butter in Bulgaria, Hungary, and Romania was significantly lower in comparison with Western and Northern Europe.

The increase of CVD mortality within the Soviet bloc seems to be only partially associated with a high prevalence of traditional risk factors. Efforts to apply the experience gained from successful preventive projects in Finland or the United States without analyzing the specificity of risk factors in this region, could lead to an incorrect formulation of priorities when determining preventive measures. The contribution of physical activity remains an open issue, but due to technical backwardness (lower number of cars, lower mechanization, etc.), the physical activity of people working in industry, agriculture, and services was generally higher in Eastern Europe than in the West. 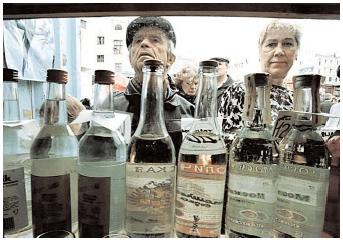 The life-expectancy of Russians dropped sharply during the 1990s. Poor nutrition contributed to higher mortality rates, as did high rates of alcoholism.

Some authors believe that economic conditions were the principal determinant of the gap in health status between the East and West. The close relationship between the gross national product per capita and life expectancy is well known, but the inhabitants of Central Europe were less healthy than their wealth predicted. The dramatic changes that occurred after the onset of communism created a toxic psychosocial environment. A loss of personal perspectives, chronic stress, tension, anger, hostility, social isolation, frustration, hopelessness, and apathy led to a lowered interest in health and to a very high incidence of alcoholism and suicide. People living for many decades in the informationally polluted environment rejected even useful health education.

It is widely believed that chronic stress can aggravate the development of chronic diseases. However, the reasons for the high cancer and CVD mortality in Eastern Europe are (with the significant exception of male smoking) not yet known. It is possible that in communist countries the effect of traditional risk factors has been intensified unidentified factors. Hypothetically, such factors can comprise psychosocial disorders, alcoholism, environmental pollution and specific nutritional deficiencies (e.g., very low intake of antioxidant vitamins, folic acid, and bioflavonoids). Very low blood levels of antioxidants, especially of vitamin C and selenium, were found in various regions of Central and Eastern Europe between 1970 and 1990.

Postcommunist period (after 1989). Thanks to its geographical location, Central Europe was best prepared for the democratic changes that occurred after 1989. After the collapse of communism, the decrease in CVD mortality in politically and economically more consolidated countries occured. The positive changes in Central European countries can be explained by higher consumption of healthful food, including a substantial increase in the consumption of fruit and vegetables, a decrease in butter and fatty milk consumption, and an increase in the consumption of vegetable oils and 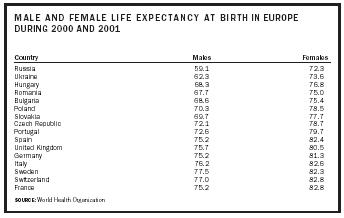 high-quality margarines. There was also a rapid improvement in the availability and quality of modern CVD health care.

Finnish and Russian epidemiologists compared the plasma ascorbic-acid concentrations among men in North Karelia (Finland) and in the neighboring Russian district. Almost all Russian men had levels suggesting a severe vitamin C deficiency, while more than 95 percent Finns had normal vitamin C levels. Comparison of fifty-year-old men in Sweden and Lithuania found significantly lower plasma concentrations of some antioxidant vitamins (beta-carotene, lycopene, gamma-tocopherol) in Lithuanian men. They also had substantially lowered resistance of low-density lipoprotein to oxidation than Swedish men. It is probable that in Russia an imbalance arose in which factors enhancing the production of free radicals (alcoholism, smoking, and pollution) dominated protective antioxidant factors.

High prevalence of smoking and alcoholism has also been an important factor in high CVD mortality rates in Russia. A substantial proportion of CVD deaths in Russia, particularly in the younger age groups, have been sudden deaths due to cardiomyopathies related to alcoholism. Alcoholism has evidently played a key role in the extremely high incidence of CVD mortality, as well as in the numbers of accidents, injuries, suicides, and murders. There is no way to determine a reliable estimation of the actual consumption of alcohol in Russia, since alcohol is being smuggled into the country on a large scale.

Normalization in the Russian Federation will likely be more difficult than in Central Europe. Trends in lifestyle, smoking, food selection, alcohol consumption, and other areas will be determined by both economic and political factors. The successfulness of the economic transformation, which provides hope for a sensible life, will be a key factor in improving health status in postcommunist countries. A significant decrease in cardiovascular and cancer mortality in Central Europe provides hope for the Russian Federation. Unfortunately, differences in life expectancy between these countries and Western Europe are still very great.

World Health Organization."Health for All Database: Mortality Indicators by Cause, Age, and Sex." Available from <http://www.euro.who.int/hfadb>