Travel advertisements for the Caribbean Islands portray long stretches of sun-drenched beaches and swaying palm trees, with people dancing to jazz, calypso, reggae, or meringue music. Indeed, the beauty, warmth, and lush landscapes had Christopher Columbus in awe in 1492 when he came upon these tropical islands, stretching approximately 2,600 miles between Florida and Venezuela.

The Arawaks and Caribs, the first natives of the islands, were not treated kindly, however, as the Spanish, French, Dutch, and British conquered the islands at different periods, all but wiping out the native populations. Today, only a few aboriginals remain in the Caribbean.

The European settlers soon realized that sugarcane was a profitable crop that could be exported to the European market. However, there was a shortage of European farmers, and slaves were brought from Africa to work on the sugar plantations. The slave trade started in 1698. European settlers fought to keep their territories and hoped for great wealth, while actively pursuing the sugar and slave trades.

Two things changed the situation on the islands. In 1756, missionaries from Germany (Moravian Protestants), came to the islands, though the landowners were opposed to their presence, fearing that any education of the slaves could lead to a revolution. At about the same time a German scientist by the name of Margraf discovered that sugar could be produced from beets, and many European countries began to produce their own sugar.

In 1772, after many revolts and uprisings, the Europeans began to free their slaves. The sugar plantations still needed laborers, however, and indentured workers were brought from China and India to work in the fields. Sugar cane, and its by-products, molasses and rum, brought great prosperity to the settlers. However, not wanting to depend solely on sugar, they began to grow yams, maize, cloves, nutmeg, cinnamon, coconuts, and pineapples on a very 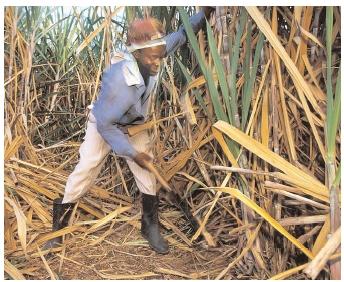 The ancestors of many Caribbean islanders were brought as slaves to work on the sugarcane plantations. In the New World, their traditional African cuisines integrated new flavors both from their new environment and from the cuisines of various European colonial powers.
large scale. Coffee also began to flourish. Many of the islands had wild pigs and cattle on them, and spiced, smoked meat became part of the diet. Today, jerk meat is a specialty.

Foods of the Islands

The foods of the Caribbean are marked by a wide variety of fruits, vegetables, meats, grains, and spices, all of which contribute to the area's unique cuisine. Foods of Creole, Chinese, African, Indian, Hispanic, and European origin blend harmoniously to produce mouth-watering dishes.

Chayote, also called Christophene or Cho-cho, is a firm pear-shaped squash used in soups and stews. The Chinese vegetable bokchoy (or pakchoy) has become widely used on the islands. Plantains, which resemble bananas, are roasted, sautéed, fried, and added to stews and soups. The breadfruit grows profusely, and is either boiled or baked, sliced, and eaten hot, or ground into flour. The breadfruit blossoms make a very good preserve.

Yucca, also known as cassava or manioc, is a slender tuber with bark-like skin and a very starchy flesh that must be cooked and served like a potato, or it can be made into cassava bread. Mangoes can be picked from the tree and eaten by peeling the skin and slicing the flesh off the large pit. They are used in salads, desserts, frozen drinks, and salsa. Papaya, which has a cantaloupe-like flavor, contains the enzyme papain, which aids in digestion. To be eaten, the black seeds must be removed and the flesh scooped out.

The soursop is a large, oval, dark-green fruit with a thick skin that is soft to the touch when it ripens. The fruit has a creamy flesh with a sweet, tart flavor. Its rich custard-like flavor can be made into a sherbet, ice cream, or refreshing drink.

The food of the Caribbean can be highly spiced. The Scotch bonnet, a colorful pepper with a hot aroma, is widely used in soups, salads, sauces, and marinades. Some other important spices are annatto, curry, pimento, cinnamon, and ginger. Annatto seeds are often steeped in oil and used to flavor soups, stews, and fish dishes. Curry powder is made from a variety of freshly grounded spices. Curry dishes and hot sauces, which are used regularly in cooking, were brought to the islands by Indian settlers.

Pimento, also known as allspice, is used in pickles, marinades, soups, and stews and is an important ingredient in jerking, a method of cooking meat and poultry over an open fire. To bring out the flavor of meat and chicken, they are marinated in a mixture of scallions, garlic, thyme, onion, lemon juice, and salt. The spices and the method of slow cooking over a fire give jerk meat its distinctive flavor.

Although fish, conch (a pink shellfish), goat meat, pork, and beef are used throughout the Caribbean, legumes make up a fair percentage of the region's protein intake. Kidney and lima beans, chickpeas, lentils, black-eyed peas, and other legumes are used in soups, stews, and rice dishes. Accra fritters, made from soaked black-eyed peas that are mashed, seasoned with pepper, and then fried, is a dish of West African origin similar to the Middle Eastern falafel. Sancocho is a hearty Caribbean stew made with vegetables, tubers, and meats.

A "cook-up" dish is one made with whatever ingredients an individual has on hand, and is an opportunity to be creative. Such a dish will often include rice, vegetables, and possibly meat. By adding coconut milk, this could turn into an enticing coconut-scented pilaf. Burning sugar to color stews is another technique used in island cooking. This process begins by heating oil, then adding sugar, and stirring until the sugar becomes an amber color.

The roti is a griddle-baked flour wrapping that is filled with curried meat, chicken, or potatoes. Coucou, or fungi, is a cornmeal mush that is served with meat, poultry, fish, or vegetable dishes.

A variety of fruit beverages are often served in the Caribbean. Beverages include green tea and "bush tea," served sweetened with sugar or honey, with or without milk. Bush tea is an infusion of tropical shrubs, grasses, and leaves that has a number of medicinal uses. People drink it as a remedy for gas, the common cold, asthma, high blood pressure, fever, and other ailments. Sweetened commercial drinks made from carrot, beet, guava, tamarind, and other fruits and vegetables are also popular.

A number of fermented drinks are also popular. Garapina is made from pineapple peelings, while mauby is made from the bark of the mauby tree. Grated ginger is used to produce ginger beer. Horlicks is a malted milk made with barley. 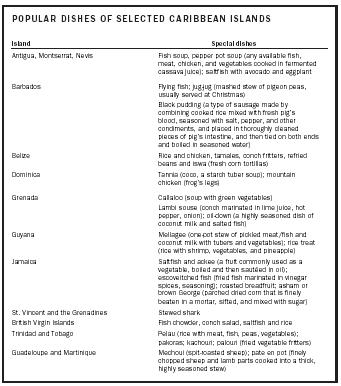 Fruit is eaten anytime of the day, but is not considered a dessert unless prepared in a fruit salad or some other form. Coconut and banana form the basis for many desserts. A sweet pudding that goes by many names (e.g., duckunoo, blue drawers, pain me, paimee, and konkee) is made from grated banana, plantain, or sweet potato, which is then sugared, spiced, and mixed with coconut milk or grated coconut, and then wrapped in banana leaves and boiled in spiced water. A prepared sweet pone (pudding) cake or pie is a popular dessert. Black fruitcake, made from dried fruits soaked in wine, is popular at Christmas time, and is also used for weddings and other celebrations.

In the Caribbean region, nutrition-related chronic diseases are common, threatening the well-being of the people of the islands. In the 1950s, the governments of the Caribbean were concerned about the malnutrition that permeated the region. They were able to increase the protein and calorie needs by making meat, fats, oils, and refined sugar more available. The health and nutrition initiatives introduced helped curbed the malnutrition, but new and related health and nutrition problems began to emerge.

The health administrators of the Caribbean region are concerned with the rise of iron-deficiency anemia in pregnant women and school-aged children due to inadequate iron intake and poor absorption. The increased incidence of diabetes, hypertension, coronary heart disease, cancer, and obesity, especially in the thirty-five-and-over age group, is thought to be directly linked to the existing lifestyle and dietary practices of the islanders.

The Caribbean Islands have seen a proliferation of fast-food restaurants, and the increased consumption of meals high in fat, sugar, and salt has contributed to the increase in chronic diseases. In addition, there has been a reduction in the amount of cereals, grains, fruits, vegetables, tubers, and legumes that are eaten. The popularity of fast foods among the young has led the government to focus on improving nutrition in the schools. Also contributing to the health problems is the dependency on costly imported processed foods that do the body harm. Overconsumption of imported foods high in fat and sodium has led to a deterioration of the health status of people throughout the region, with an increase in health problems such as obesity, diabetes, hypertension, cardiovascular disease, and cancer.

Due to insufficient resources and less than adequate planning, the school feeding programs on most of the islands exhibit many shortcomings. However, on the island of Dominica, where a self-help initiative involving the parents was introduced, the eating habits of school-aged children improved and the parents and communities adopted many of the program's menus and preparation methods. As a result, school attendance increased and the attention span of the children in class improved.

School nutrition programs need constant monitoring to improve the nutritional status of the children involved. Furthermore, a good nutrition promotion campaign must be designed to educate and promote a healthy lifestyle for the population at large.

The Caribbean region has the tremendous task of putting in place appropriate policies, plans, and programs to address the changing health and disease patterns of the region's people. This effort is made more difficult because of the socioeconomic, political, and cultural differences among the Caribbean countries. The various countries must not only examine the food availability and how it is consumed, but they must also assess and evaluate the quality of the food and the nutrition intake of those most at risk.

The governments of the Caribbean have come together under an initiative called Caribbean Cooperation in Health. They hope to work closely together through five types of activities: service, education training, providing information, coordination, and research. The food goals of each country must be analyzed, with care and attention paid to the agricultural policies and economic opportunities in each specific country.

Desiring a longer and richer quality of life, many governments of the Caribbean Islands have introduced programs to combat chronic diseases and promote a more physically active lifestyle. For example, in Grenada, a campaign to "grow what you eat and eat what you grow" demonstrates a move to increase consumption of local foods.

Adequate nutrition cannot be achieved without the consumption of sufficient foods containing a wide array of nutrients. Poor health status, whether as a result of insufficient food intake, overconsumption, or nutrition imbalance, threatens longevity and increases health care costs. The challenge is to improve the availability of nutritious foods and the eating habits of the varied population.

"Assessing Dietary Trends in the Caribbean" (1998). Cajanus, the Caribbean Food and Nutrition Quarterly 31(4).

Stein-Barer, Thelma (1999). You Eat What You Are: People, Culture, and Food Tradition, 2nd edition. Toronto: Firefly.