Jean Anthelme Brillat-Savarin was a French lawyer and politician. He served as mayor of Belley, the city where he was born, but his opposition to the Jacobins during the French Revolution made it necessary for him to flee to Switzerland in 1792. He then made his way to New York, where he taught language and played violin in the John Street Theater Orchestra to support himself.

After two years in New York, Brillat-Savarin spent time in Connecticut familiarizing himself with American culture and food. He took advantage of the opportunity to ask Thomas Jefferson how to prepare a wild turkey. Approximately four years after his exile, Brillat-Savarin was able to return to France after being reinstated as an honorable person. Soon after, he began serving as a judge of the Supreme Court of Appeal in Paris, a post he held for the rest of his life.

Brillat-Savarin embraced Parisian society and intellectual life, but he is best known for his culinary expertise and his twenty aphorisms on food, one of which was, "Tell me what you eat, and I will tell you what you are." Even as a child he loved to be near the kitchen. While in Paris, he wrote Physiology of Taste, or Meditations on Transcendental Gastronomy, which he published anonymously. Chapters discussed, among other things, the aphrodisiac properties of certain foods, the nature of digestion, and the dangers of acids in the stomach. The book was a success, and the people of Paris were anxious to learn the identity of this very witty and elegant author. His colleagues were not as impressed as the public and looked down on him, not considering him to be an expert in a relevant field of study. He had previously 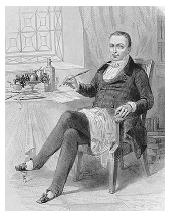 "The destiny of nations depends on the manner in which they are fed." Jean Anthelme Brillat-Savarin, whose culinary writings and passion for food distinguished him in Napoleonic France.
written various treatises on dueling, economics, and history, but these were not very well known.

Brillat-Savarin contributed to the knowledge of digestion and nutrition through his essays on food and taste. He also shared his ideas on food preparation and its role in life and philosophy, and he provided discourses on obesity and its cure (and on thinness and its cure). In recognition of his achievements, various dishes, garnishes, and a cheese bear his name.

Brillat-Savarin's work reflects interactions with philosophers and physicians of his time. While he remained a bachelor all his life, he had many prominent guests sitting at his table for meals, and he often sat at the best tables of Paris. Among his guests were Napoleon's doctor, Jean-Nicolas Corvisart, the surgeon Guillaume Dupuytren, the pathologist Jean Cruveilhier, and other great minds. Cruveilhier was such an authority on the stomach that gastric ulcers are referred to as Cruveilhier's disease. Through such interactions, Brillat-Savarin undoubtedly gained knowledge about the chemistry of food and how it relates to the physiology of digestion. So passionate was Brillat-Savarin about food that many people identified him more often as a chef rather than a lawyer.