The Western Health Reform Institute, which opened in 1866, was originally a residence belonging to Benjamin Graves, a judge of the Michigan Superior Court. Set on eight acres of land, this farm house gave no hint of what it was to become, but already there were ideas and propositions for the building that would lead to a worldwide reputation.

Upon its opening, in 1866, the Western Health Reform Institute was heralded far and wide through the Seventh-day Adventist journal Review and Herald. Dr. H. S. Lay, the first physician in charge, and James and Ellen White, early founders of the Seventh-day Adventist Church, were instrumental in founding this health institution. Taking in visitors and teaching simple principles, such as advocating the use of "Graham" bread and counseling eight hours of sleep at night, the institution struggled to live up to its grand name until 1876, when John Harvey Kellogg became medical director. In 1877, Kellogg changed the name to Battle Creek Sanitarium.

Ellen Gould White had come to Battle Creek, Michigan, in 1855 with her family. White was an advocate of healthful living, and she and her husband encouraged young John Harvey Kellogg to study medicine and eventually return to Battle Creek as medical director and surgeon.

The sanitarium, in its heyday during the 1880s, was the most famous health institution in the country, a reputation it held until World War II. The sanitarium was also instrumental in spawning the health food industry and lent strong support to the concept of vegetarianism.

Cereals put Battle Creek on the map. In November 1855, there were 3,000 inhabitants in all of Battle Creek, yet there were soon over forty cereal manufacturers 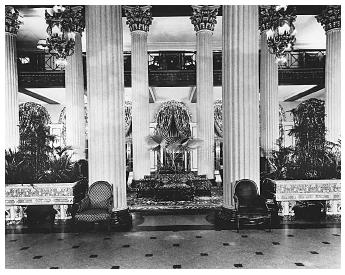 In the late nineteenth and early twentieth centuries, the Battle Creek Sanitarium was an incubator for nutritional health movements, including vegetarianism and temperance. Early sanitarium members developed such dietary innovations as breakfast cereal and graham crackers.
in the city, and entrepreneurs and famous personalities would soon find their way to Battle Creek. Both Kellogg's brother Will and C. W. Post were to find great success and spawn businesses worth millions of dollars—all from the humble principles found in eating cereal breakfasts and promoting health foods for their protein, their calories, their minerals and vitamins, and, most of all, their bran. Famous personalities that visited the Battle Creek Sanitarium included J. C. Penney in 1929 and Professor Ivan Pavlov of Leningrad, Russia, who, at the age of eighty, visited in the summer of 1929.

The Great Depression interrupted the growth and expansion of this successful enterprise. On February 18, 1902, a fire burned two main buildings to the ground, and Kellogg immediately began an ambitious rebuilding project. He said at the time that "buildings may burn, but principles survive." The expansion cost $4 million and was done in 1928. But by 1930, with a capacity for 1,400, there were only 300 patients in residence. In 1930, at the age of seventy-eight, Kellogg retired to Florida to start another sanitarium, which ran at full capacity (100 beds) for the remaining thirteen years of his life.

The Battle Creek Sanitarium represented a haven to those who made pilgrimages to its abundant facilities. It afforded indoor exercise facilities, a steam-heated environment, and all the amenities of a first-class hotel, including Edison electric lights and polite attendants. In 1927, its golden anniversary year, the Battle Creek Sanitarium treated more than 7,000 patients. It eventually became the Percy Jones Army Hospital, which treated casualties of World War II and the Korean War.