Food allergies affect approximately 3 percent of children and 1 percent of adults in the United States. It is estimated that an even larger percentage of the population experiences problems with food intolerance. Worldwide, adverse reactions to food constitute a significant public health issue.

The term adverse reaction is used to describe health problems linked to food. Food allergy and food intolerance are two types of adverse food reactions (food-borne illnesses caused by bacterial, viral, or other forms of contamination are also adverse reactions). A food allergy is said to exist when the health problem is linked to a malfunction of the immune system. It is believed that this malfunctioning occurs when the body identifies a food protein (allergen) as a harmful substance. Food intolerance occurs when the underlying problem causing the adverse reaction is not related to a malfunction of the immune system. One example of a food intolerance is lactose intolerance, a condition affecting people who cannot digest milk due to a deficiency of the enzyme lactase, which breaks down milk sugar (lactose). 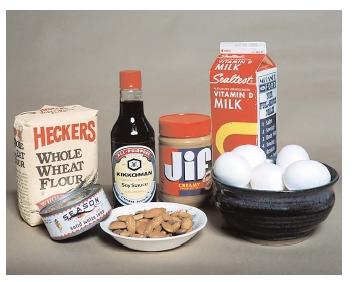 Almost any food can cause an allergy, though the foods most commonly associated with an allergic reaction are those frequently consumed by a population. For example, an allergy to rice is common in Southeast Asia, while fish allergy is a problem in the Scandinavian countries, where fish is frequently consumed (even at breakfast). Age is also a factor influencing the types of foods to which a person might be allergic. In the United States, common foods to which adults are allergic include eggs, shrimp, lobster, peanuts, other nuts, and fish. U.S. children who have food allergies find their problems are most frequently linked to milk, soy, eggs, and peanuts. Infants may be allergic to cow's milk or soy formulas. Some food allergies may be outgrown, but allergies to peanuts, shrimp, and fish tend to last throughout life. In addition, some individuals are only allergic to one food, whereas some are allergic to several foods.

An allergic reaction can be triggered by a very small amount of a food. Persons with food allergies need to read food labels carefully and ask restaurant workers about food ingredients, and the food industry needs to ensure that processed foods are appropriately prepared so that people are not exposed to food allergens unknowingly. This may happen when improperly cleaned food equipment is used to prepare multiple types of food. 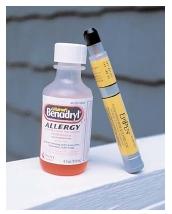 Antihistamines can give some relief of minor allergic reactions, such as skin irritation. For more severe reactions, administering a dose of epinephrine may halt life-threatening anaphylactic shock.

The symptoms of food allergy vary widely from person to person. Food allergies can also cause a severe clinical reaction known as anaphylaxis, which can result in death. Anaphylaxis may be characterized by throat and lip swelling, shortness of breath, sweating, itching, and feeling very faint.

Diagnosis of a food allergy usually involves a careful examination of the patient's symptom history. Other causes of symptoms must be ruled out, and in some instances the suspected food or foods will be eliminated from the diet to see if symptoms stop. Blood tests or skin tests may also be performed. One test sometimes used to diagnose food allergy is the double-blind, placebo-controlled food challenge. This test involves giving a patient a capsule containing a suspected food allergen and a capsule without the allergen (the placebo) and seeing if either causes symptoms in a controlled clinical setting. The test is called double-blind because neither the patient nor the physician evaluating the symptoms is aware of which capsule contains the allergen at the time the testing occurs.

Foods associated with intolerance include: preserved foods, foods containing monosodium glutamate (MSG, a flavor enhancer), and specific foods such as milk, pickled herring, soy sauce, chili peppers, and nutmeg. Intolerance to lactose is a major problem for many populations. In the United States, lactose intolerance is common among those of African and Asian descent. The Native American population also has a high prevalence of lactose intolerance.

Health problems caused by food intolerance vary depending upon the food and chemical involved. The amount of a food eaten may also play a role. Lactose intolerance is usually characterized by gastrointestinal problems such as bloating and diarrhea. Sulfite intolerance is typically characterized by difficulty in breathing. Those sensitive to MSG may experience a variety of symptoms, such as headache, numbness, and rapid heartbeat. Tyramine, found in pickled herring, soy sauce, red wine, and other foods, has been linked to migraine headache. Capsaicin can cause a "burning" pain in the mouth and other problems, such as nausea and vomiting. Myristicin has been associated with anxiety, chest pressure, hallucinations, fever, and skin redness.

Diagnostic techniques for food intolerances vary depending upon the specific intolerance suspected. Symptom history and elimination diets are tools that are used, and the double-blind, placebo-controlled food challenge may also be helpful. Diagnosis of lactose intolerance in adults may involve measuring the blood to see if lactose is being broken down and showing up as blood sugar (glucose), or by measuring the level of hydrogen in the breath, which is increased in persons who are lactose intolerant (lactose produces hydrogen gas in the colon).

Other controversies relate to testing for food allergies. One controversial test is cytotoxic testing, which involves testing blood in the presence of the suspected food allergen to see if the blood cells are killed.

Peanut allergies, which are among the most widespread food allergies, affect more than 1.5 million people in the United States. Symptoms of an allergic reaction may include a flushed face, hives, difficulty breathing or swallowing, vomiting, dizziness, chills, and loss of consciousness. The reaction of an allergic person to peanuts can be rapid and dramatic, sometimes causing death within minutes. The incidence of peanut allergies among children doubled in the United States between 1997 and 2002, prompting some schools to consider banning peanuts and peanut products from their premises. Proponents of a ban note that as little as half a peanut can be fatal in an allergic child, and that the risk of shared lunches or other accidental exposure is too great. Others argue that a peanut ban provides a false sense of security for children who inhabit a peanut-ridden world, and that educating students and school personnel about the problem, and preparing for the occasional incident, are more appropriate responses.

Treatment of Food Allergies and Intolerances

The major mode of treatment for food allergies and intolerances is for the person to avoid consuming the food or foods that seem to cause health problems. This involves a high degree of dietary awareness and careful food selection. When foods are eliminated from the diet, it is important to ensure the nutritional adequacy of the diet, and some individuals may need to take dietary supplements. There are some food intolerances, such as lactose intolerance, where individuals may be able to reduce the amount of the food consumed and not totally eliminate it from the diet. People with lactose intolerance do not have to completely eliminate milk products, though they must reduce their intake of lactose (milk sugar) to a manageable level.